Your perspective on Provincetown was shaped in some measure by Mary Heaton Vorse (1881-1966), the author of Time and the Town: A Provincetown Chronicle (1942), whose house this was from 1907 until her death in 1966. An ardent progressivist and champion of labor — a “militant liberal,” The New York Times said in her obituary — Vorse was deeply involved with the Provincetown Players. In her book, she depicts the town with the convincing skill of a W.P.A. muralist. It’s not that she glosses over fissures, but she imbues her characters — Portuguese, Yankee or washashore; fisherman, homemaker or playwright — with proletarian nobility and the capacity to put aside differences and work shoulder-to-shoulder in the town’s best interests.

But in all her years here, this property was not known as the Mary Heaton Vorse house but as the Kibbe Cook house, after one of the last great whaling captains, who lived from 1824 to 1905. (Vorse spelled his name Kibbe, but contemporary records show him as Epaphras Kibby Cook, or E. Kibby Cook, or E. K. Cook.)

“I still call my house Kibbe Cook’s house, as though it were only lent me,” Vorse wrote in Time and the Town. “Last summer on the New Beach I got to talking with an old lady, who turned to her husband to say, ‘Isaiah, here are the folks who live in Kibbe Cook’s house!'” At the time of this encounter, on what is now called Herring Cove Beach, Captain Cook would have been dead 36 years.

“Kibbe Cook carried in his small person the whole history of the rise and fall of the whaling industry,” Vorse said. He and his brother, Capt. Ephraim Cook, owned one of the largest fleets on Cape Cod, doing business as E. & E. K. Cook & Company. They were agents of the famed Alcyone. But the advent of kerosene, among other factors, devastated the industry. In one fell swoop, on 8 April 1879, the Cooks saw eight of their vessels — four of them whalers — auctioned off by the First National Bank. Kibbe Cook lost his house at the same time. It wound up in the hands of Benjamin Lancy, who allowed Cook to spend the rest of his days there, penniless as he was. Vorse recalled that when creditors came to the house seeking payment, Cook would say he had no money but would be glad to play a little Mozart for them on his cello.

Cook had been dead a year when Vorse first laid eyes on the house. Born in New York City to Hiram and Ellen Heaton, Mary Heaton had studied art in Paris before marrying Albert White Vorse in 1898, when she was 17. They took a trip to Provincetown in 1906. “When I drove around the town in a horse-drawn accommodation, I knew that here was home, that I wanted to live here always,” she wrote on the opening page of Time and the Town.

What I experienced when I first drove through Provincetown’s long street, when I walked through the low, scrubby woods ‘in back’ through the dunes to the outside shore, was as definite, as acute, as falling in love at first sight. The knowledge that this was to be my home forever did not come as a shock, or with any sense of surprise; it was rather as though I were invaded by the town and surrounded by it, as though the town had literally got into my blood.

But where to live? The old Kibbe Cook place, at what was then denominated 427 Commercial Street, “had that untenanted and miserable air of a house whose people had died and left it abandoned,” she wrote. “For this old house was not merely closed. It was a home going begging. The front windows with crooked shutters aswing seemed to peer out into the world, seeking for a family to make it live again.” The next time they saw it, however, the house had been fixed up by David Stull, who now owned it, and painted yellow. The deal was clinched. “I like to live in an old house,” Vorse wrote. “I like the careful, leisurely workmanship of a former day, the patina which comes only with time, the golden dimness that they years lay across a well-constructed dwelling.”

The joy of a new life at the Cape tip did not last long. Albert died of a cerebral hemorrhage in 1910, leaving his widow to care and provide for their two young children, Heaton W. (b 1902) and Mary Ellen. “There was only one way I knew how to earn money,” Vorse told Frank Crotty of The Worcester Telegram in 1957, “and that was by writing.”

And write she did; mostly light fiction at first but then aggressive journalism. Indefatigably, Mary Heaton Vorse covered labor and social strife in the United States and wars everywhere else. In several instances — during a strike in Passaic, N.J., in 1926 and a rally in Gastonia, N.C. in 1929 — she was in physical, if not mortal, peril. She was fired upon by vigilantes during a strike at the Republic Steel Corporation plant in Youngstown, Ohio, in June 1937. The Associated Press sent out a photograph nationwide showing Vorse looking slightly stunned but still coolly determined, an open gash on the left side of her head where her temple had been grazed by a bullet, with blood running down on to her blouse front. The caption included this cautionary note: “EDS: Mrs. Vorse requested this photo not be used in New York and Boston because of the effect it might have on her daughter.”

But she kept on writing. She kept on writing after her marriage to the newspaperman Joseph O’Brien, with whom she bought the old Lewis Wharf at 571 Commercial Street (where Eugene O’Neill’s Bound East for Cardiff was first performed in 1916) and with whom she had another son, Joel O’Brien. And she kept on writing after O’Brien died in 1915, leaving Vorse twice widowed in the space of five years. She wrote and wrote and wrote. Sinclair Lewis credited her with this advice: “The art of writing is the art of applying the seat of your pants to the seat of the chair.” Vorse’s articles appeared in Masses, Harper’s, The New Republic, The New Yorker, The Atlantic, McCall’s and Ladies’ Home Journal. She published 16 books, including Men and Steel, Labor’s New Millions and Footnote to Folly. Towering among them was the last she wrote: Time and the Town, published by the Dial Press in 1942.

In contrast to earlier accounts, which tended to focus on one or another facet of the town, Vorse’s book attempts to embrace the crazy whole and make some sense of it. Its tone of progressivist utopianism can still be heard in modern political debates, as can its insistence that the marvelous whole of Provincetown is greater than the sum of its many quirky — and not-always-functioning — parts.

Another factor ensuring Time‘s timelessness is the obvious affection of the author for her subject. That extends to the once-lovely and nameless path, now called Vorse Lane, running past her house on the west. “Hardly a day goes by when artists aren’t out there painting,” she told Crotty. “One of John Whorf’s paintings of the yard was made into a colored print and I have seen it in such distant places as Los Angeles and in hotels in Europe. I have also seen it in mid-ocean, on the Île de France.” Two of the views shown below are by Walter Edward Parsons (1890-1962) and Marjorie Windust Halper (1908-1996).

Young Mary Heaton Vorse’s intimation that Provincetown would be her home forever proved true. When we think of the town’s golden age, we are often seeing it through the lens she crafted. She died in this house on June 14, 1966, and is buried in Town Cemetery, as Mary Heaton Vorse O’Brien. Her daughter, Mary Ellen, married the artist John Wigner Beauchamp in 1934, and followed her mother’s footsteps as a writer — but for a slightly different audience. Stories like “Skinny Gets Fat” and “Wakey Goes to Bed” were written in the early 1940s with an eye toward her own young son: John Richard Vorse “Butch” Beauchamp (b 1937). 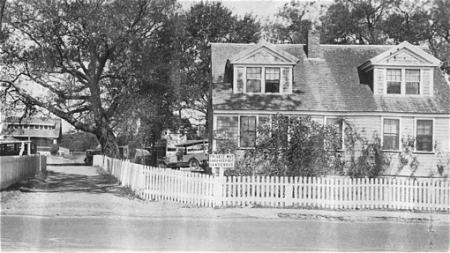 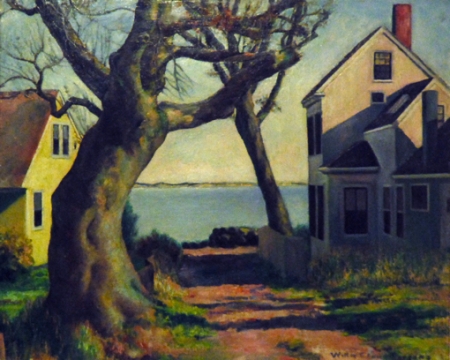