As you approach the Turn in Commercial Street from the east, you may think you’re being watched. You are. A bust of William Shakespeare has taken up more-or-less permanent residence in a second-floor window at No. 112. Year in and year out, window open or shut, the ghostly little Bard casts his eyes over the West End Rialto.

Since 1994, this has been the home of John Dowd (b 1960), who is certainly the town’s best known contemporary landscapist and is among its better known contemporary artists — period. He also holds a key civic post: chairman of the Historic District Commission, which regulates a lot of what owners in the district can and cannot do with the exteriors of their properties — not an assignment guaranteed to make fans and friends of everyone who comes before (or tries to avoid) the commission.

The house itself has been well known for more than a century, since it was a great favorite of postcard publishers, situated so picturesquely where Commercial and Tremont Streets branch off from the main stem. It had an ideal Provincetown quality in that it wasn’t perfectly shaped or ideally proportioned. Rather, it had grown quite obviously by accretion into an entirely asymmetrical jumble. The Historic District Survey estimates that the core of the house, with Greek Revival ornament, dates to about 1840. 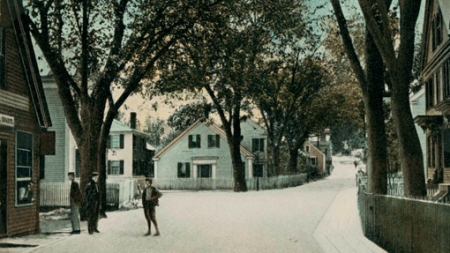 For much of the latter half of the 19th century, the house was owned by Mrs. Rebecca G. Cutter. At that time, it was denominated 103 Commercial Street. She and members of the Smith family transferred the ownership in 1907 to William Miller, who sold it in 1919 to the fisherman John Taves (±1896-1940) and his wife, Mary (Cabral) Taves.

The two were married in 1917. Around 1919, they had a son Richard Louis; around 1922, Joseph A. Taves was born. Taves served in the Coast Guard for a while and then, in 1931. bought the dragger Lucy F. from John Ferreira. He dragged for flounder in winter and, in summer, chartered the vessel as a fishing party boat. Thus, Captain Taves was not only known in the fleet but he was also “popular among summer visitors,” The Advocate reported (“Town Is Mourning Captain John Taves,” 22 February 1940). He was credited with helping save the life of Capt. Louis Santos of the Atlanta in 1938. But rescuers were too late to save Captain Taves in February 1940, when the Lucy F. was caught in a blizzard. He had evidently worked all night at the pumps to save his foundering vessel and, at dawn, apparently lost his footing as he was about to board a dory to escape to safety. The Advocate painted the grim scene:

“The Lucy F. was anchored about 300 feet off the wharf of the Cape Cod Cold Storage plant and although Captain Taves’s calls for help could be heard by many along shore, a half hour elapsed before a boat could be brought to the scene. When the Wood End boat arrived at the Lucy F., they found the body of Captain Taves at the stern, with the dory painter [rope line] knotted about his wrists. All efforts to revive him were in vain and the body was taken to Sklaroff’s Wharf.”

Mrs. Taves kept the house another five years. The census of 1940 showed that Richard had followed his father into the fishery. By 1944, he was in the Army. Joseph Taves enlisted in the Naval Reserve and became a radioman in the Navy. He was stationed at Pearl Harbor on 7 December 1941, and went on to participate in many major sea battles in the South Pacific. On leave in 1943, Joseph became one of the first service members of World War II to join the Provincetown Veterans of Foreign Wars post.

The next owners of the house were Joseph M. Andrews (b 1910), a laborer and fish handler, and his wife, Mary S. Andrews (b 1910). The Andrews family sold the property to Dowd in 1994 for $100,000. “No one I know thought it was a good idea for John to buy this place, even though the price was low (as, we all felt, it well should have been),” Michael Cunningham wrote in Land’s End: A Walk Through Provincetown (Crown Journeys, 2002, with a cover painting by Dowd). “Everyone I know is astonished at the house John was able to find under all that aluminum and asphalt, that general air of quiet hopelessness.”

Dowd, who divides his time between Cape Cod and Manhattan Island, received a bachelor’s degree in architecture in 1983 from Notre Dame. He began coming to Provincetown in the 1980s. He rented studio space in the old Days Lumberyard coal-storage bins at the Fine Arts Work Center on 24 Pearl Street and lived at 411 Commercial Street. The renovation of the coal bins into the Stanley Kunitz Common Room [?] compelled Dowd to find new quarters and that was when he bought the aluminum-sided house at the Turn. “It turns out that aluminum siding peels off, as John put it, ‘like foil off a baked potato,'” Cunningham wrote, “and in this case had actually helped preserve the old wooden siding beneath.” He continued:

“As a renovator, John’s trues gift lies in his respect for the process of decay. Provincetown is full of ‘restored’ houses that, with every good intention on the part of their owners, have been rendered so pristine, they might be part of a Cape Cod village section in Epcot Center. John’s aesthetic runs more toward Miss Havisham, and his house is not only lovely but looks as if it has been standing there, more or less unaltered, for at least a hundred years.

“Usually in summer someone is staying there, in one of the upstairs bedrooms with an old brass bed and a dormer window. Often more than one or two people are staying there. It is a bit like I imagine English country houses to have been during the days of Jane Austen — a sort of ongoing semiparty with guests who come and go, read books in the garden or cook some dish they’re renowned for, gather at dinnertime, and then disperse again.”

Dowd is represented in town by the William Scott Gallery at 439 Commercial Street. Though he’s been a fixture of the Provincetown scene for more than a quarter century, he was one of the youngest artists represented in the critically important exhibition, “The Tides of Provincetown: Pivotal Years in America’s Oldest Continuous Art Colony (1899-2011),” with Backstreet, Provincetown (2011). He also lent a number of paintings to the show, in an arrangement that reminds one of 112 Commercial Street, where the walls have few — if any — paintings by Dowd, but are richly hung with the work of other Provincetown artists.

Alexander J. Noelle, who curated the “Tides” show for the New Britain Museum of American Art, noted the kinship between Dowd and Edward Hopper. “He is inspired by the smallest details of the area,” Noelle wrote in the catalogue, The Tides of Provincetown, “which he weaves together in canvases that pay homage to the beauty of the landscape and the architecture.” Sounds a lot like the house. 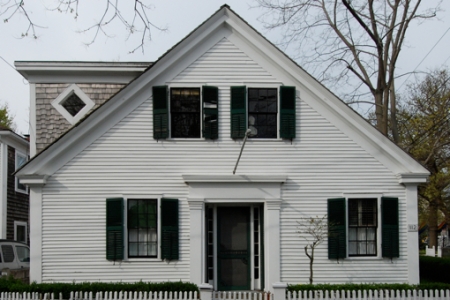 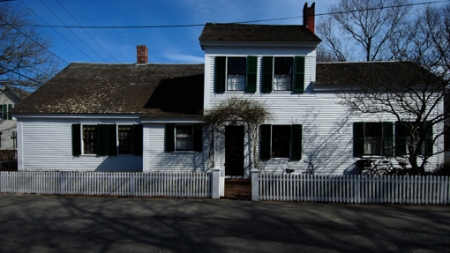 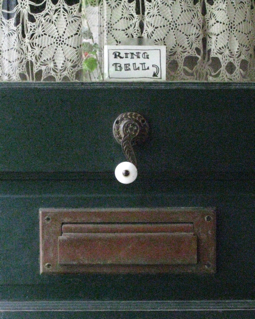 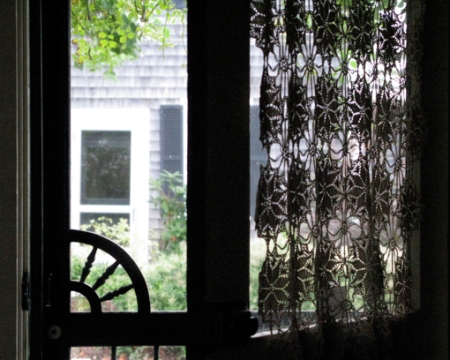 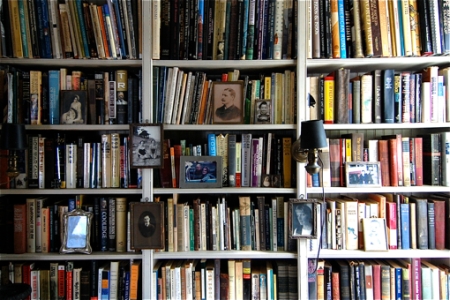 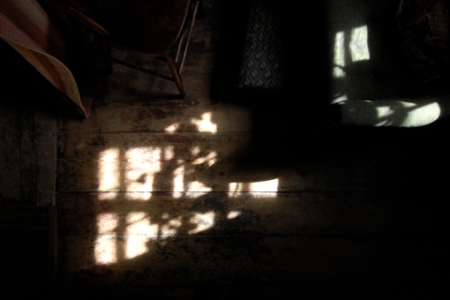 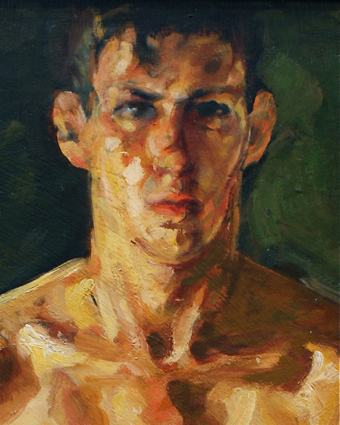 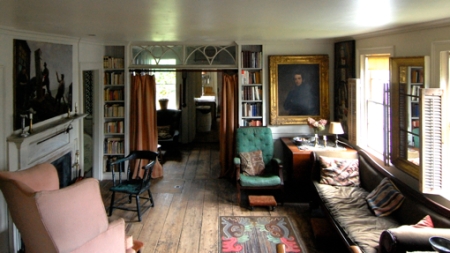 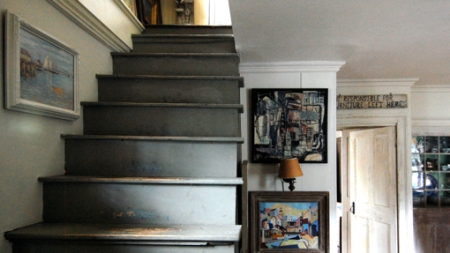 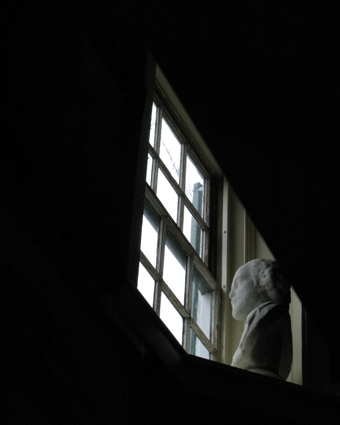 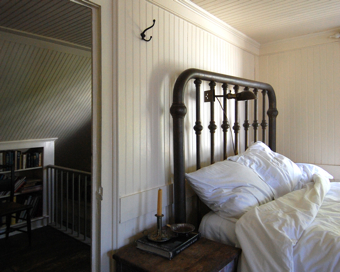 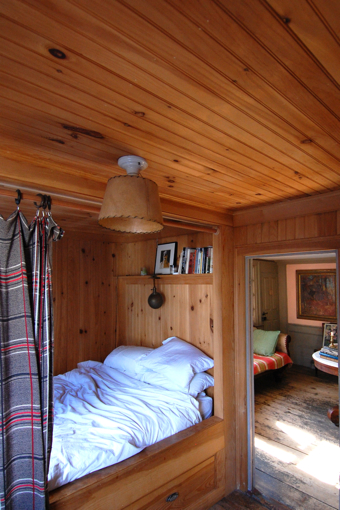 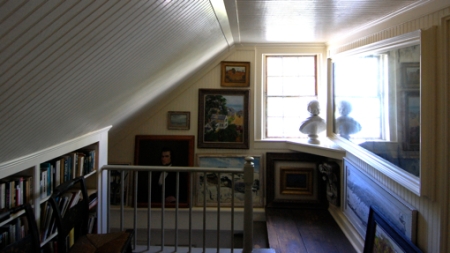