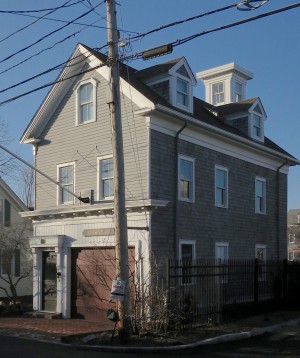 Built in 1858, a year before the Fire Department was formally organized, this structure was originally designated Fire House No. 2. The cupola, its most distinctive feature after the truck bay itself, marked the loft in which hoses were dried. For much of the 20th century, these were the quarters of Pumper Company No. 1, first responders to any fire in the far West End, signified by a single blast of the alarm on Town Hall. One of the longest-term volunteers here was Joseph Andrews, who was a member of this house for 29 years until his retirement in 1980. The house was decommissioned in 1993 and is currently a private home in which the truck bay doubles as a front porch. It has been owned since 2002 by Bryan Rafanelli and Mark Walsh.