Howard B. Burchman, who runs the Tucker Inn with his partner, Thomas Kinard, believes he may have been imprinted with the innkeeping gene. “I was conceived while my parents were running a small hotel in the Catskills,” he said. The distinctive mansard-roofed house, in the Second Empire style, is currently laid out with eight guest rooms. There is also a freestanding guest cottage. It was constructed in 1872. By 1910, it had become home to the Bowley family, which produced a decorated naval hero in Rear Admiral Clarence Matheson Bowley.

His father, Cmdr. George W. Bowley, had been a superintendent in the Life-Saving service. In the Pacific theater in World War II, Captain Clarence Bowley was the commanding officer of the U.S.S. Prichett, a Fletcher-class destroyer. For his conducted of the ship during the battle for Okinawa in April 1945, Captain Bowley received the Navy Cross. “On 3 April, Captain Bowley’s ship was under heavy attack by many enemy airplanes for over three hours,” the citation read, “but by his courage, skill and combat, and determination, Captain Bowley caused his ship to drive off the attacks, destroy three enemy planes and damage others. Although his ship was severely damaged in the action he continued to fight so effectively that further damage was prevented.” Bowley died in 1988. He had sold the Center Street property 14 years earlier. By the time of his death, it was being run by Linda Allen and Roger Allen as an accommodation known as the Twelve Center Guest House.

Denise Karas and her wife Katherine L. Bishop owned the property from 1995 to 1998. “We are the ones who named it the Tucker Inn and designed the sign and the stained-glass doors,” Karas told me in 2017. “We redesigned the entire house and added bathrooms and other amenities. We were also members of the Women Innkeepers [of Provincetown] group that organized Women’s Week.” So what does “Tucker” have to do with Karas and Bishop? “We made up the name of Captain Miles B. Tucker, who advanced from a cabin boy to captain without anyone suspecting that he was a she. When ‘he’ got into ports of call, all the women from the town would descend upon the ship to welcome ‘him’ and have a lovely ‘tea dance’ in her honor!” Provincetown innkeepers probably have racier anecdotes to tell than their counterparts in other small towns. “One of our funniest ones was the day we went in to freshen a guest room and tried to push in a drawer only to have the drawer front fall off,” Karas recalled. “In our attempt to secure it, we exposed a drawer full of feather boas, masks, whips and toys.  The women who were in this room were in their 60s and looked like two nuns. Kathy kept whispering, ‘Don’t touch anything!'”

Burchman, a management and financial consultant in New York, came on the scene in 2001. Admitting that he was initially an amateur when it came to innkeeping (no matter those genes), Burchman said, “The inn and our family have evolved and grown together, striving for the balance of peaceful and connected, Zen and rock and roll.” Burchman is the chairman of the town Planning Board. He has also managed the Ranch Guestlodge and has served as president of the Provincetown Theater Foundation. 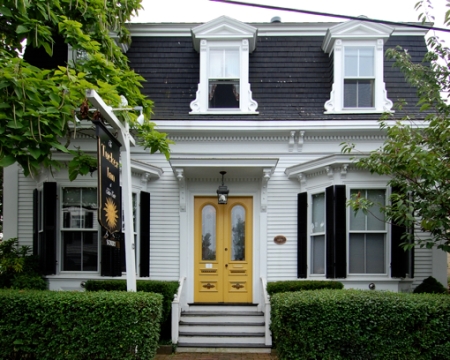