Although it is nestled closely to the Red Inn, the Beach Box house originally had a much stronger link across Commercial Street and up Gull Hill to Land’s End Inn at 22 Commercial Street. This was the home of Irene W. Bunker, the owner who was responsible for transforming the old Higgins bungalow at the top of the hill into the Lands End Tea Room in June 1932. Bunker started by serving lunch, tea and light dinners on the porch, in the dining rooms and in the tower.

The Buckler family sold the house in 1945 to Griswold Kellogg Green and his wife, Francis Scott Green, of New York. They owned it for eight years until selling it to Col. Richard A. Magee and his wife, Nelle C. Magee. The colonel, an aviator in World War I who rose to his rank in the Army Air Force during World War II, was most closely associated with Cobb Farm in Truro, owned by his wife’s family. But the couple also owned this home in the 1950s. They were known for their benefactions and helped acquire the lower Cape’s first ambulance, The Advocate said. Among their renters over the years were the artist Nanno de Groot, who spent the summer of 1953 here, a decade before he and his wife Pat completed their distinctive studio-home at 507 Commercial. The Abare family was the next owner, followed by Donald Winter and his partner, Richard diFrummolo (±1946-2007), a supporter of the Provincetown Theater and board member of the Provincetown Repertory Theater. (“Richard diFrummolo, 61,” The Banner, 1 February 2007.)

The owners since 2010 have been Kathleen A. Cote, former chief executive officer of WorldPort Communications, and her partner, T. Kim Cromwell, the founder of Cromwell Consulting. “Over the course of the last two years we have renovated the house completely, while also keeping true to the original style and structure,” Cromwell said in a comment to Building Provincetown in May 2012. 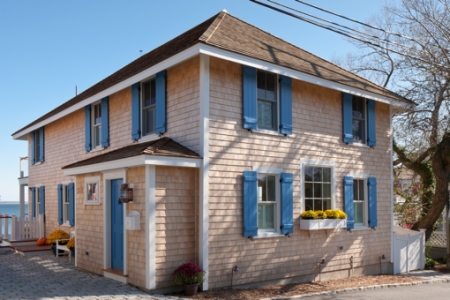 One thought on “19 Commercial Street”