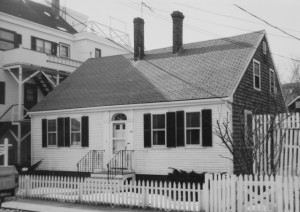 Spiritus pizzeria is interwoven with recent history, and its home has a fascinating past life. It was built in the 1830s for Reuben Collins II. Sixty years later, his children Richard and Minnie physically divided the house between them. It was not reunited again until the 1940s. John Yingling arrived in 1978 and transformed it into Spiritus, with a free-spirited décor. Under the same roof, Gus Gutterman and Arnie Charnick ran Spiritus Ice Cream. Spiritus has long been the after-hours gathering spot for bar-goers, partiers, late diners, and hundreds of other men. (The pizza is good, too.) The scene was upended in 1986 during a three-night melee between the police and gay protesters known as the “Spiritus Riot.”