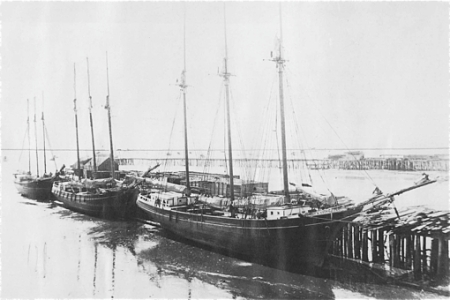 Joseph Atwood Wharf
This wharf, once known as the Market Wharf, was originally associated with the wharfhead building where Café Heaven is a longtime tenant, which was constructed in 1845-46. The overall operation on the pier and in the upland structures was the fitting of vessels and the purchasing of cod and mackerel.

The Historic District Survey notes that the whole place was purchased in 1858 by Capt. Benjamin Rider and converted into a lumber yard, which was its use under the ownership of Joseph Atwood. The picture above comes from one of the Scrapbooks of Althea Boxell, who said in her caption that having three lumber schooners in at the same time was a rare sight. 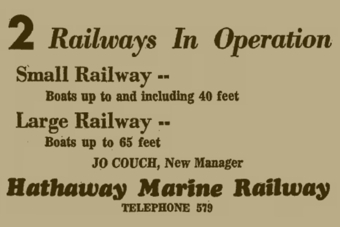 William A. Hathaway Jr. was the owner of the complex in 1945 when he planned the Hathaway Marine Railway, similar to those seen today at Flyer’s and Taves. In 1947, he was joined by the boatbuilder Jule Costa. Two years later, a second railway opened, giving Hathaway the capacity to haul up boats up to 40 feet on one ways and boats up to 65 feet on the other. Dan Clark took over the management of the railway and boatyard from Hathaway in 1951. Josephine Couch Del Deo took over the next year. It doesn’t seem to have continued much past the early 1950s.