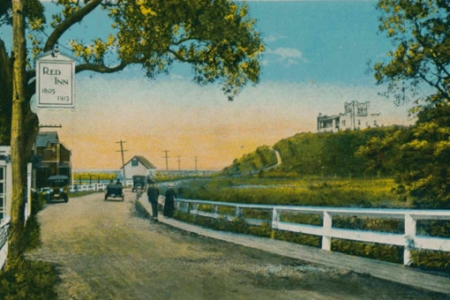 Commanding a view as far as Wellfleet, the Louis Hollingsworth home was known as the Castle or Castle Dune; also as Pilgrims’ Landing (still visible on the gateposts). It was next owned by George Paine. Anton von Dereck had an art metal studio here. In 1936, the property was bought by Dr. Carl Murchison, a well-known psychologist at Clark University. He and his wife, Dorothea, collected works by artists connected with the town. Ross Moffett estimated there were 250 paintings and 150 prints and other works. Almost all were lost in 1956, when the house burned down. The Murchisons, vowing to rebuild, created Provincetown’s most distinctive work of mid-century modernism.