The title tells the story, in an appealingly forthright New England kind of way. This is a little building, but it looms large for West Enders — quite truly a beacon — when they need some indispensable grocery, first-aid or cosmetic item at an hour when other businesses are closed or just too far away. It also has a remarkably broad selection of gay magazines (especially given the conventional wisdom that gay magazines aren’t being published anymore). Long ago, this was the office of the Lewis & Brown coal and lumber business. Fast forward to the mid-1950s, past epochal changes in the town, and No. 227 had become the Jimi-Jak Sportswear shop, whose advertisements featured a harlequin pattern and little diamonds atop the lowercase i’s and j’s.

That was just the beginning. In 1957, Harold K. Hersh of Brooklyn — “Mr. Kenneth,” to you — opened Les Beaux-Arts, “for the unusual in hats, gifts, cards and things.” Perhaps despairing of the way that name was being pronounced, he rechristened the store Mr. Kenneth’s Mad Hats for the 1958 season. A Google search for his creations turned up a wide-brimmed navy straw hat to which two felt hands were sewn, as if the wearer were holding her own hands to her head. Each of the red fingernails had a costume jewel affixed. Mad, indeed.

“Kenneth was the delightful and flamboyant creator of extravagantly decorated and very popular hats he sold at Mr. Kenneth’s,” said the historian Irma Ruckstuhl, in a comment to Building Provincetown. He and Irving M. Baff lived at 4 Center Street, where Ronny Hazel lives now. “Both Kenneth and Irving [Baff] were lovers of classical and operatic music and had a large collection of recordings. Sadly, Kenneth died at a fairly young age.”

In the late 1960s, No. 227 was Elaine’s Beauty Salon. In March 1971, Edward and Judith Polay opened the Little Store. They were forced out of the building for six years in a dispute with the landlord, but returned in 1997 with a store redesigned by Adam Peck, as The Banner reported. The property has been owned since 1996 by Scott C. Ravelson [?]. The tax lot includes the adjacent 229 Commercial Street. 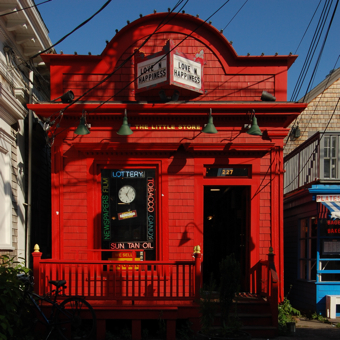