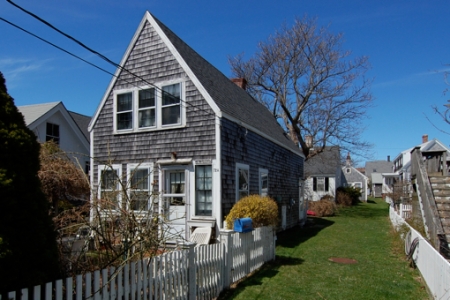 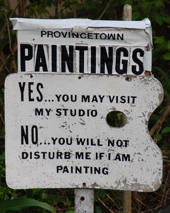 William Maynard Studio
Built as Sol Nickerson’s workshop, this small shed-style cottage at 72A Commercial Street was once F. Coulton Waugh’s painting studio. (Waugh and his wife also operated shops in 72 Commercial Street.) One of Waugh’s best known and most delightful compositions — a cross between his work as a painter and as an illustrator — is A Map of Cape Cod (1926). The building is now the studio of William Maynard (b 1921). A sign in the yard invites passersby to watch Maynard at work. ArkArt‘s thumbnail biography, by Donnell Walker, says: “William Maynard is a graduate of the school of the Museum of Fine Arts, Boston. He also studied for two years at Massachusetts College of Art.

“Mr. Maynard was on the faculty at New England School of Art and Design for 32 years and at one time was chairman of the Fine Arts Department. He was also a faculty member at the school of the Museum of Fine Arts, Boston.” Next to the studio is the most charming byway in town: Ericsson Avenue, a grass-carpeted alley between Commercial and Bradford Streets. It may be the only “avenue” in America that invites you to tread it in bare feet. 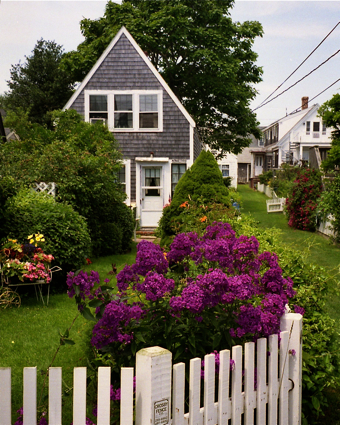