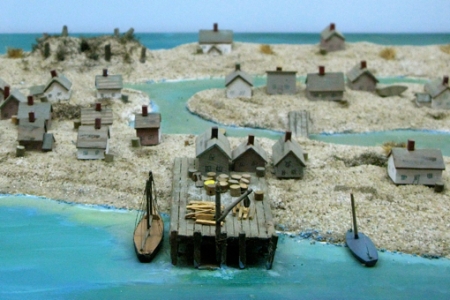 Among Provincetown’s more inscrutable ornaments are these pretty blue-and-white enameled plaques, found mostly in the far West End. They indicate that the houses to which they’re affixed were contructed in the early 19th century out on Long Point and later floated over to town on scows. (Or, at least, that the owners once believed their houses had come from Long Point.) These “floaters” are vestiges of a community that once lived as close to the fishery as anyone could get — without being in a school.

The Google map above gives an approximate idea where many “Long Point floaters” once stood. (Note that you can zoom in for a closer view. And you can click on any of the icons to learn who lived there and to what address the building was moved.)

It’s based on a charming hand-drawn map, shown below, titled “Long Point Province Town and Location of Inhabitants in About 1857,” found in the Scrapbooks of Althea Boxell and also used, in modified form, by Nancy W. Paine Smith in The Provincetown Book. Neither source credits the map nor describes its provenance.

Its reliability, however, is questionable — as are many popular assertions about the Long Point diaspora. Although there is a small cluster of genuine “floaters” around Point Street, the eminent town historian Irma Ruckstuhl cautions that there may not be too many more than that. She noted that Claude and Hank Jensen, the designers and fabricators of the “floater” plaques, would typically oblige whomever asked for one; they certainly didn’t demand proof that the building to which the plaque would be affixed had been transported across the harbor on a scow. Like any tale of town history, therefore, the story of the “floaters” should be taken happily but skeptically, with a grain of salt — or a bite of salt cod.

The fisherman John Atwood put up the first building at Long Point in 1818, Herman Jennings recounted, followed by Prince Freeman and Eldridge Smith.

Mackerel, shad and bass were plentiful off shore, and could be hauled in by the barrelfull with sweep seines. There was ample room at the point for salt evaporation works, an industry led by Eldridge Nickerson.

In 1822, Long Point recorded its first birth: Prince Freeman (another one). Smith’s son, Ed Walter, was born in 1851. By 1846, there were enough families to warrant a proper school, which doubled as the church. A post office was built, as was a bake house. John Atwood Jr. constructed a wharf and conducted a general store.

More than 50 buildings, including windmills for the salt works, were scattered around the Lobster Plain. The population reached 200.

Universalism attracted its earliest adherents on the cape tip after Prince Freeman’s sisters, Elizabeth and Sylvia, rescued a copy of John Murray’s autobiography from the sea. They read his writings and then spread the good word themselves.

The celebrated naturalist Louis Agassiz arrived in 1852 to call on Nathaniel E. Atwood, a skilled ichthyologist.

But the fishing grounds were already being exhausted. The settlement was abandoned rapidly. Only two homes and the school house remained by the mid-1860s. Almost the entire hamlet was floated across the harbor on scows.

John Atwood Jr.’s house landed at 6 Winthrop, Prince Freeman’s at 49 Commercial, Eldridge Smith’s at 301 Bradford, Nathaniel Atwood’s at 5 Nickerson. The bake house wound up at 18 Commercial, the post office at 256 Bradford and the school house at 329 Commercial (where it served as Arnold’s radio shop until it burned down in 1949).