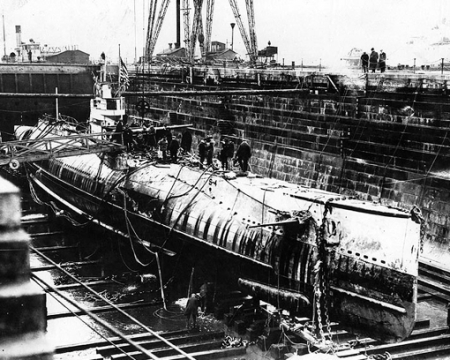 On 17 December 1927, 34 sailors, four officers and two visitors were aboard the U.S.S. S-4, which was on a trial run when it surfaced unexpectedly in the path of the oncoming destroyer, U.S.C.G. Paulding, on rum-running patrol. The sub quickly sank more than 100 feet, unable to surface on its own.

Twenty-four hours later, a Navy diver managed to communicate with survivors in the forward torpedo compartment by pounding out Morse code on the hull. He asked how many survivors were there. “There are six; please hurry. Will you be long now?”

The Navy rebuffed offers of assistance from an experienced commercial salvager in Boston and from the fishermen of Provincetown. But gale-force winter winds hindered the official rescue efforts. “Please send us oxygen, food and water,” said a coded message on the 19th. To Provincetown’s growing distress and anger, the Navy was unable to do so. The rescue effort was called off on the 22nd.

The S-4 was raised in March 1928 and returned to service as a test ship used to devise rescue and salvage methods. She was credited with having indirectly helped save 33 crew members of the U.S.S. Squalus, which sank in 1939 off New Hampshire.

A memorial cross stands in the yard of the Church of St. Mary of the Harbor, 517 Commercial Street.

“Provincetown never forgets the S-4,” Mary Heaton Vorse wrote in Time and the Town. “There is a special terror in the memory of those men waiting, tapping their patient messages, and dying. Everyone in Provincetown had a feeling that it was their individual task to save these men and no one could do anything.” 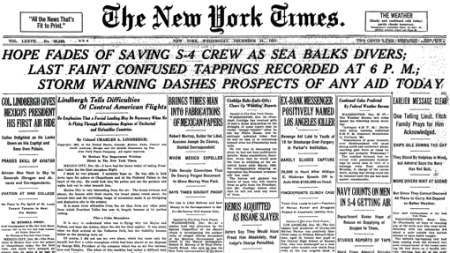