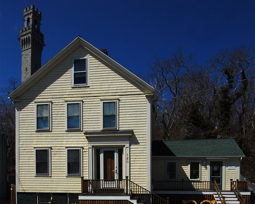 Two of the best known stores of the mid-20th century were the Men’s Shop, 261 Commercial Street, and Nelson’s Market, 150 Bradford Street. Their proprietors — the Lopes and Nelson families — lived in this house, which was built between 1840 and 1850, according to the Historic District Survey. Occupants of the house would have had front-row seats to the 1919 parade welcoming home the veterans of the Great War (Provincetown History Preservation Project). James Arthur Lopes (±1866-1942) and Mary “Minnie” Lopes were living here by the 1940s.

Lopes, whose parents had come to Provincetown from the Azores, was a Coast Guardsman for 28 years. His son, James Arthur Lopes (±1904-2001) ran the Men’s Shop, “The Place to Go for the Brands You Know,” from 1938 to 1973. By the early 1950s, Clarence M. and Mabel Nelson were living here and running the market, not far away, that is now Far Land Provisions. Great sorrow befell this house in 1953 when their 20-year-old son, Neil H. Nelson, was killed aboard the U.S.S. Leyte, as the aircraft carrier burned in Boston Harbor.

One thought on “120 Bradford Street”