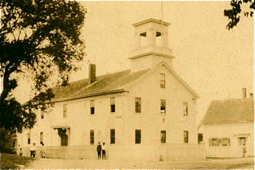 Central School House
The Central School House was one of three district schools built in 1844 — along with the Western and Eastern (still standing) — each to serve a three-grade cohort: primary, intermediate and grammar. Henry David Thoreau may have been referring to this building when he described a school house “filled with sand up to the tops of the desks.” Its site is now a parking lot, associated with one of the more brutal crimes in recent history: the execution-style shooting in 1996 of Linda Silva, an investigator for the Department of Social Services. Seven years passed until the arrest of a suspect, Paul Dubois, whose request for child custody had been opposed by Silva. Dubois was convicted of first-degree murder in 2004.