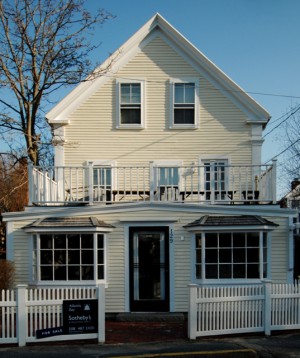 Bryant House, as this property was known for many years, was opened by Mary Ann (MacKenzie) Bryant of Nova Scotia in 1914. At first it was a restaurant specializing in seafood, roasts, chops, and steaks. Her daughter-in-law, Marie-Louise (Kopp) Bryant, expanded it into a guest house, which she ran until 1949. Marie-Louise’s son, George Bryant, is an architectural historian and legendary local iconoclast. This was l’Hotel Hibou in the 1970s; Eddie’s Pastry Shop, run by Eddie Moran, in the ’90s; and, more recently, the Monument Barber Shop. It’s now the summer home of Alan Cancelino and Scott Perry of New York.