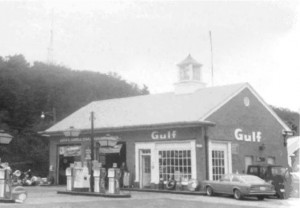 At downtown’s heart are two service stations. Like many older Gulf Oil buildings, the Sajivan Inc. dealership at No. 130 has a Colonial Revival motif. Hubert and Laura Summers owned it until 1958 and ran a popular restaurant, It’s Hubert’s, which doubled as the bus terminal. Marcey’s Service Station followed, under Edward “Marcey” Salvador, who gave his nickname to the Marcey Oil Company. He sold the station to James Cordeiro, who turned it over to his son Neil. Cumberland Farms used to run the convenience store. The parking lot next door, once site of the Central School House, is where Linda Silva, a state social-services investigator, was killed in 1996 by Paul DuBois, who blamed her for losing custody of his children.