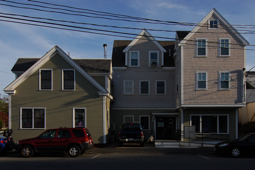 Cater-corner from the passenger depot, this house (c1900) was once owned by the New Haven Railroad and was the home of the stationmaster, A. E. Slade. It served as the first Fine Arts Work Center from 1968 to 1972, before the center moved to Pearl Street. Commercial tenants have included the Cheshire Cats boutique, Meetinghouse restaurant, Different Ducks restaurant, Tropical Joe’s restaurant (where the Kinsey Sicks played) and Cyber Cove business center. In 2006 the original section of the building was bought and restored by Neal Kimball of Kimball Residential Design. The building is reportedly haunted, said Susan Leonard, who works there.