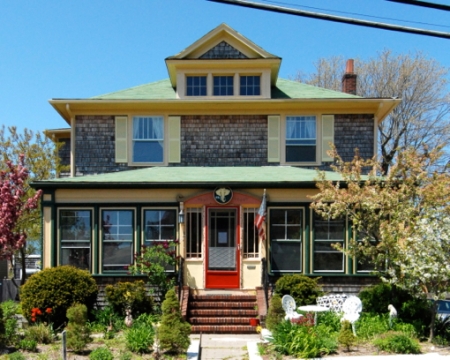 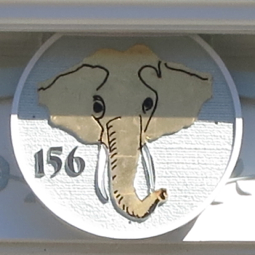 Spoiler alert: fast-forward through history to the provenance of the inn’s unusual name. It comes from Elizabeth Taylor’s two-tusked 1954 vehicle, Elephant Walk. Now, back to our story:

Sears, Roebuck & Company sold mail-order house kits in the early 20th century that were known as “Modern Homes.” They contained all the lumber, fixtures and plans to do it yourself. This is one of several Sears kit houses in town. Given how centrally Provincetown’s freight train yard was located, shipping such kits must have been relatively easy. (I say “relatively” since I myself couldn’t build a Revell scale model without trouble.)

It was a boarding house in the 1940s, run by Amelia Emily (Francis) Davis, where naval and civilian engineers stayed during trial runs of new submarines off Long Point. Davis was the “official ‘mother’ in charge,” The Provincetown Advocate reported in 1944, when the house was reconditioned as the base officers’ quarters for the nearby Naval Mine Test Facilities, 241 Bradford Street. “The building was requisitioned by the Navy,” Paoletti wrote, “as were the Sunset Inn, the Crown and Anchor and the Provincetown Inn. Officers were lodged in the house and there was an officer’s mess in the basement. In the early ’50s, the rear section of the inn was added. A subsequent owner had to smash the Navy’s huge cast-iron stove in the basement to get it out, as this new addition had altered the means of egress.”

Alden “Pete” Steele and his wife Clotilda “Tillie” Steele bought the property in 1965 from Tiago Avelino and ran it as a very well-recommended guest house called Casa Brazil Lodge, Irma Ruckstuhl wrote in a comment below. Paoletti added: “Duane Steele, who for a time was the editor of The Provincetown Advocate, grew up in this house. His former wife, Betty Steele, a onetime town selectman, told me how she would visit Duane there and the front porch would be full of live plants all winter long. With all its windows, it was like being in a green house.” 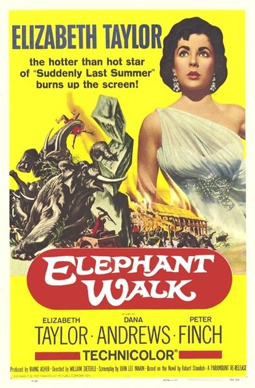 The Steeles sold the house in 1972 to Phyllis and Frederick Klein for $130,000. “When I moved to Provincetown in 1972, the entire property was known as Casa Brazil,” Paoletti wrote. “It included all the rental units in the back, and for a short time, the building now known as Admiral’s Landing. (Prior to being Admiral’s Landing, that property had been known as Waves Landing, owned by two women who purportedly had served in the WAVES during World War II.”

“In 1983 or 1984, Gold Coast Properties bought the Casa Brazil and renamed it Elephant Walk. Gold Coast was a consortium of five or six individuals who bought large old properties, fixed them up and sold them off as condominiums. David Brudnoy, a talk radio personality from Boston, was the main share holder. Conrad Harding, the front man, was a minor shareholder who managed one property after another. Among their other conversions are Normandy House, Fo’csle to Fat Jack’s, and the Plain and Fancy-Pilgrim House complex. The inn was named after the Elizabeth Taylor movie Elephant Walk. One of the members of Gold Coast Properties was a fan of Miss Taylor’s and thus the name was attached to the property.”

“In 1985, I bought the main house. What had been the carriage house and rental apartments in the rear were sold off separately. What I bought was a shell with minimal furnishings but good bathrooms and parking. At Victoria House, a lack of parking had been a major problem. Over the years. I gradually refurnished the inn, brought in a wide range of antiques and fine reproduction furniture. Original art was hung throughout the house, including some of my own paintings, as well as reproductions from Maxfield Parrish and Joseph Leyendecker.

“Hurricane Bob [1991] tore apart the retractable awnings that were on the front room of the inn, now the common room. So I replaced them with the permanent, non-folding, green-and-white-striped awnings for which the inn became noted. I also added them to many of the other windows on the inn, thereby giving it a distinctive landmark look. They were professionally removed and stored for the winter.

“I referred to the building as Elephant Walk Inn, to differentiate it from a Cambodian-French restaurant in Cambridge. When I sought to register the name for an Internet site, I discovered that “Elephant Walk” had already been taken, so I added the ‘Inn.’ All I know is that the year Ron Robins of the Mews Restaurant hired an elephant to march in the Carnival parade, I made sure that animal was going nowhere near my house.”