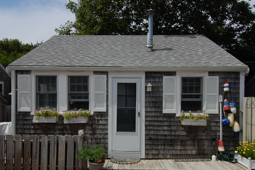 Harbor Mist Condominium
The Old Whaler Cottages formed the kind of modest cottage colony around a central courtyard that one would expect to see out at Beach Point. But here it was near the middle of town. (Of course, it was not much less exposed to the elements; a hurricane in 1947 left one of the cottages partly upended.) Beginning in the early 1930s, the complex was known as the Old Whaler, under the proprietorship of John Perry Woods (±1897-1952), the son of John P. and Monica D’Avellar Woods. (“John Perry Woods,” The Advocate, Nov. 20, 1952.)

After Woods’s death, the property passed to his wife, Caroline (Silva) Woods, who kept running the place for another six years until she turned it over to her son, Robert L. Woods, and his wife, Bertha L. Woods. In 1967, the Bass River Saving Bank moved to foreclose on the Woods. The next summer, the Old Whaler had become Bo’s Nest Cottages. Since the mid-1980s, it’s been the six-unit Harbor Mist Condominium. 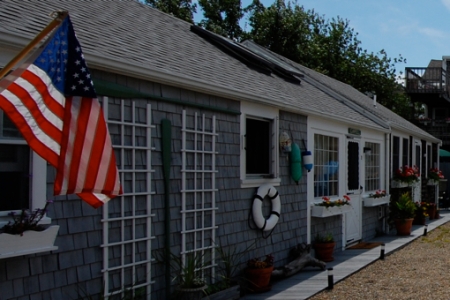