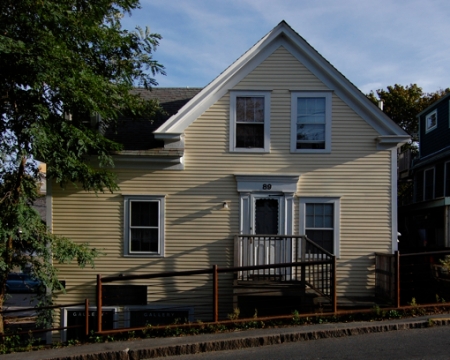 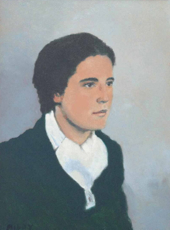 The old Gouveia home at 89 Bradford Street is the centerpiece of this complex, multilevel condominium whose several entrances conform to the abrupt grade change at Bradford and Masonic Place; a change so steep that it is closed to vehicles, but open to pedestrians over a short flight of steps. It’s almost impossible to tell from the street that the Gouveia house is connected with 12 Masonic Place and 10 Masonic Place (known as Tower House). In the hearts of longtime residents, though, No. 89 is a cherished landmark as the home of Graciette “Grace” Leocadia (Gouveia) Collinson (±1910-1998), a teacher and community organizer whose memory is honored at the municipal Grace Gouveia Building, 26 Alden Street.

Grace was born in Olhao, Portugal. Her father, Carlos M. “Ti Carlos” Gouveia (±1880-1963), had already emigrated to the United States, where he worked as a Grand Banks fisherman. Before making the crossing herself as a six-year-old, Grace had never seen her father. But she had pictured him dearly, relying in part on descriptions offered by her mother, Mary Barbara (Lazard) Gouveia (b ±1883). Waiting for her arrival at the dock in Providence, R.I., were two men: her father and a Mr. Manta, his translator. “When I came down from the boat, I went straight to the other man,” Grace later recalled. “Mr. Manta was the epitome of what I wanted a father to look like.” (Laurel Guadazno, “Reminiscences of Grace Collinson,” The Provincetown Banner, 24 June 2004.) 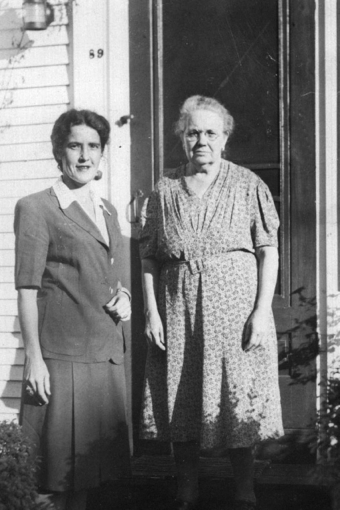 Her subsequent arrival in Provincetown by train was not entirely auspicious. “I was frightened because the houses were separated, and there were yards,” she said. “I had never seen yards. In the village of Olhao where I lived in Portugal, on the street there was just one straight façade, and the houses were separated only by the structure of a door and a window.”

Nor was her first taste of American education — at the Governor Bradford School, 44 Bradford Street — much of an improvement. “My mother, with the utmost respect for education, always dressed me in my best pinafores. I was isolated by the language barrier, dressed in a special way, and was the object of abuse and ridicule.” Perhaps that explains, in part, why she became such a beloved teacher. She understood what it was like to be an outcast.

Her understated account also casts an appropriate pall over the modern-day romance of the fishery. She made it quietly plain, from a family member’s point of view, how brutal the ritual was, with her father gone for months at a time on the Grand Banks, southeast of Newfoundland:

My mother would get word that the vessel was sighted off the back side, and without stopping for anything, she’d grab me by the hand, and take me down to the beach, where other women were gathered. They waited in silence for the two-masted ship to round Wood End and the Long Point light, and watched to see if the boat was coming in at half-mast. Once they saw it was not half-masted they knelt and blessed themselves, and went home to prepare for their men. If the ship came in at half-mast, as it often did, there was weeping and wringing of hands, and prayers were offered to the Holy Mother and St. Peter.

Her teaching career in Provincetown began in 1936 and lasted 27 years, after which she joined the Peace Corps. Though she enriched the town in many ways, her most enduring legacy is probably the municipal Council on Aging, which is housed — fittingly enough — in the Grace Gouveia Building. 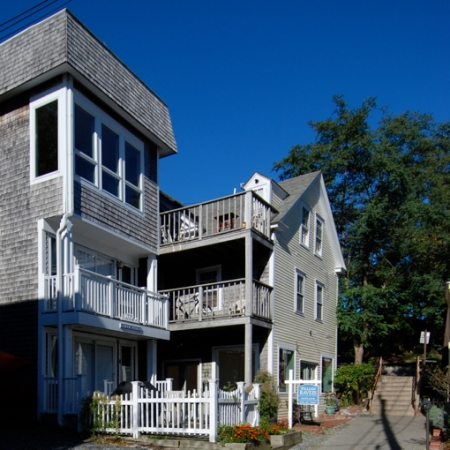