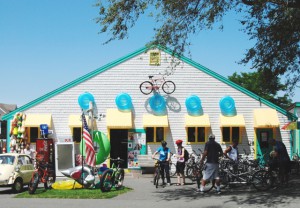 Beach Market and Gale Force Bikes, a popular place to rent bicycles for the Cape Cod National Seashore trails, occupies the site of the main barn of Galeforce Farm, founded at the turn of the 20th century by Frank Silva Alves, a fisherman and native of Pico, in the Azores. In its early days, it was one of five dairy farms in town. Frank’s son, Joseph Alves, took over in 1934, installed pasteurization equipment in 1941, and increased the herd to more than three dozen Guernsey and Holstein cows. But a lack of farmhands and a spate of bad weather killed off Galeforce in 1952, by which time it was the last dairy farm at the Cape tip.