2 Allerton Street, pictured in “The House That Is, or a Tale of the Ship’s Bell.” 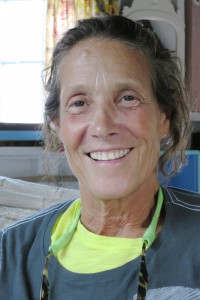 Built around 1800 on Commercial Street, the house was moved to this site and opened in the late 1920s as the Ship’s Bell (“because of the gladness that was ringing in our hearts”) by Eleanor Bloomfield and Mary “Ivy” Ivins. They called themselves “independent women.” Contemporary eyes might see the Ship’s Bell as the town’s first lesbian-owned guest house. It was later owned by Charles Hapgood, author of The Earth’s Shifting Crust, and his wife, Tamsin (Hughes) Hapgood, a real estate agent. Their son, William Hapgood, an inventor and musician, sold it in 2001 to the artist and photographer Marian Roth, and the clothing designer Mary DeAngelis. Hapgood owns the garage, No. 2A, whose attic apartment shelters the artist Barbara E. Cohen.