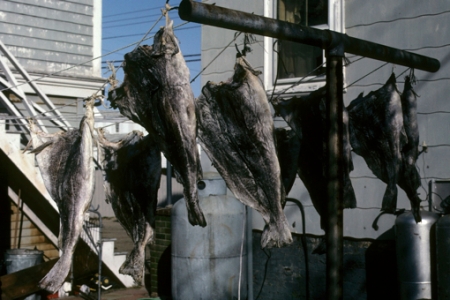 Here is vanished Provincetown. “Kids in the west end and east end used to dodge the fish drying on the clothes lines as they ran through each other’s yards,” Susan Leonard recalled. Jay Critchley took the picture in the 1970s and believes this was the making of skully jo, a kind of fish jerky. Leonard thinks it might have been bacalhau (cod). In either case, you won’t see its like today.

Until the Great Depression, this was Barnett’s Market, run by Frank R. Barnett and Mary (Cook) Barnett, daughter of Anna Cook and Frank Cook, who were listed here as grocers in 1910. Manuel Cabral acquired it out of foreclosure in 1934 and later added a second story to house summer help at his Bonnie Doone Restaurant nearby.

David J. Murphy, the legendary basketball coach at Provincetown High School, lived here with his family, including Donald Murphy (b 1940), who grew up here and now lives in the Tod Lindenmuth house, known as Our Summer Place, at 56 Commercial Street. “Anybody’s Market was right outside my bedroom window,” he recalled in a conversation with me in 2011.