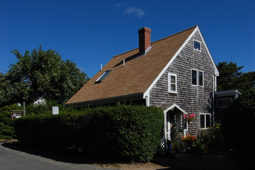 Allerton Framing
Currently the location of Allerton Framing, this was the last home of one of the town’s most enduring craft businesses: the seven-decade, two-generation Rilleau Sandal Shop. Founded in 1940 by Roger Rilleau (1909-1977) as Hand Industries, at 322 Commercial Street, it moved next to 347 Commercial Street. Roger’s son, Kim Rilleau (b 1950), conducted the business here from 1968 to 1997.

“As the days count down until the Allerton Street shop closes, Rilleau continues to measure people’s feet, cut the thick rolls of creamy leather stacked in the rafters overhead and turn out sandals in the same way his father, Roger, did starting in 1937,” Sue Harrison wrote in the The Banner. “The shop, a converted garage next to the family home, is cluttered with dyes, driftwood, sculpture, whale bones and dusty shelves filled with hand tools. Permeating the building and wafting into the driveway is the deep, rich smell of leather that new cars can only aspire to. Ledgers dating back to the first custom orders are still meticulously kept by hand and a stack of foot tracings are mounting up as loyal customers try to get in under the gun.” Rilleau said the school situation and the difficulty of making a year-round living contributed to the family’s reluctant decision to close up shop in Provincetown. The business continues today in Woodstock, Vt. as Rilleau Leather. And, according to Seven Days, Rilleau still keeps the foot measurements from customers of the Provincetown shop going back to 1947.