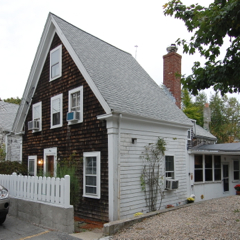 There are a couple of these “Potemkin village” houses in town, with fully developed front facades that are only one bay deep, and a smaller ell structure in the back. (10 Pleasant Street is another such example.)

It was under renovation in the fall of 2012.