This lovely and consequential house (c1875/85) has been in the foreground of thousands of pictures taken from the Pilgrim Monument. The Victorian-era gingerbread trim in its eaves is unmistakable. Walter P. Chrysler made his home here while running the Chrysler Museum of Art. Roslyn Garfield, lawyer, real estate broker and civic leader, had her office here. Staying here as a renter, Urvashi Vaid wrote Virtual Equality. END_OF_DOCUMENT_TOKEN_TO_BE_REPLACED

It’s one of the largest buildings in town and — arguably — one of the ugliest. But 241 Bradford Street actually had a small role in a critical moment of national history. This storehouse was constructed as part of the U. S. Naval Mine Test Facilities in Provincetown, commissioned in 1942, which became a busy military post during World War II. In 1948, the town acquired a longterm lease from the United States for $1 and proceeded to rehabilitate the structure as the Provincetown Vocational School. The program was conducted here for 15 years before moving to Provincetown High School.

The second Station Peaked Hill Bars was constructed in 1914, roughly a quarter mile east of the first station, as a replacement. Within a year, the Life-Saving Service merged with the Revenue Cutter Service to form the new U.S. Coast Guard. With its off-center lookout tower, this building resembled the Old Harbor Life-Saving Station. END_OF_DOCUMENT_TOKEN_TO_BE_REPLACED

Seen from across Herring Cove, the National Park Service’s new Herring Cove bath house pavilions, which opened in 2013, seem almost to be levitating over the beach. Well, indeed they are. Several feet. The entire complex is on pilings, allowing surge waves to pass underneath, as well as to allow the entire complex to be moved farther upland if necessary. That is one of several attractions designed into the $5 million project by its architect and project manager, Amy Sebring, of the park service’s design and construction division. END_OF_DOCUMENT_TOKEN_TO_BE_REPLACED 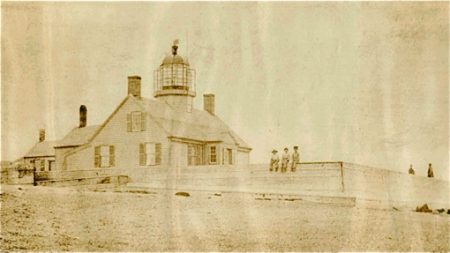 The constant among all the changes out at Long Point has been Long Point Light Station. The first lighthouse — really a jumbo lantern atop the keeper’s house — was constructed in 1826. It was replaced in 1876. 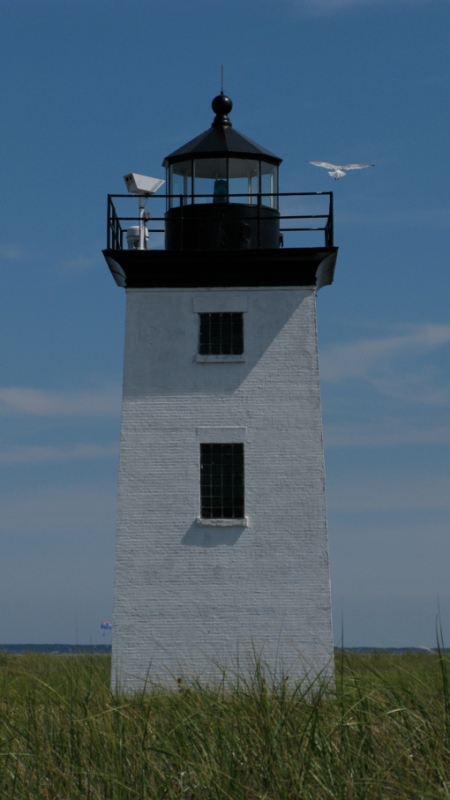 The current lighthouse — a 38-foot-high tapering brick tower whose green beacon flashes a welcome to Provincetown Harbor every four seconds — was constructed in 1876. Today, only the nearby oil house remains of a larger complex that once existed around the tower, including a keeper’s house, a fog bell enclosure almost as tall as the lighthouse, and a boat house. END_OF_DOCUMENT_TOKEN_TO_BE_REPLACED

The Old Harbor Life-Saving Station was built in Chatham in 1897, based on the handsome “Duluth” prototype designed by George R. Tolman, examples of which proliferated along the Atlantic coast and Lake Superior. END_OF_DOCUMENT_TOKEN_TO_BE_REPLACED

Integral with the lighthouse was the Race Point Life-Saving Station, built in 1872. The main boat building looked very much like that at Peaked Hill Bars. END_OF_DOCUMENT_TOKEN_TO_BE_REPLACED

The Coast Guard built its own Station Race Point from 1930 to 1931 on the site of the old Life-Saving Station, reusing a number of out buildings. The imposing three-and-a-half story main building has a hipped roof and a neo-Classical portico. END_OF_DOCUMENT_TOKEN_TO_BE_REPLACED 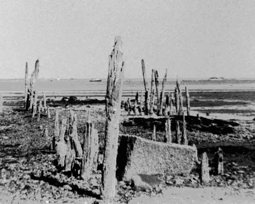 On what is now a parking lot and town landing at 55 Commercial Street stood Western Cold Storage, the westernmost of Provincetown’s cold storage facilities; enormous, industrial-strength fish processing and freezing plants which once lined the waterfront. Only one, the Ice House, survives. The Western was built in 1917 and only operated for a year before shutting down. The town seized the property for non-payment of taxes and tore down the building in 1937, leaving a parking lot in its wake that has been there ever since. The Long Point exhibit at the Pilgrim Monument and Provincetown Museum indicates that a floater house also occupied this site.

West End Racing Club
The West End Racing Club sounds like a place whose members dress in commodores’ outfits, but it is in fact a nonprofit organization begun at Flyer’s Beach in 1950 that teaches children to swim and sail. Their shoreline clubhouse at 83 Commercial Street was finished and dedicated in 1957 on “the same ground where once stood the old Wharf Theater.” This building was to house summer activities and provide a wintertime storage area for the boats. END_OF_DOCUMENT_TOKEN_TO_BE_REPLACED 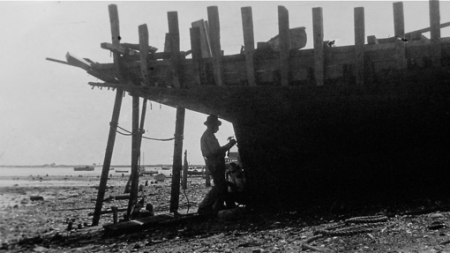 That Manuel “Ti Manuel” Furtado (±1880-1945) was the father of the 20th-century boatbuilding business in Provincetown is beyond dispute; not only did he have one of the principal boatyards in the early decades of the 1900s, but Furtado alumni went on to establish Flyer’s Boatyard and the Taves Boatyard. He was born in São Miguel in the Azores, landing in Provincetown in 1898, as a ship’s carpenter. He spent some time fishing on the Grand Banks, but then — around 1920 — he set up shop at the base of Union Wharf, where he earned a reputation for his “painstaking skill and craftsmanship” in constructing light boats, The Advocate said (“Boatbuilder Dies, Mourned by Many,” 7 June 1945). END_OF_DOCUMENT_TOKEN_TO_BE_REPLACED

This is one of the two great vestiges of the cold storage plants, or “freezers,” that once lined the waterfront and gave it an industrial cast that is almost impossible to imagine today. END_OF_DOCUMENT_TOKEN_TO_BE_REPLACED

Now home to Scott Rodgers and Jon Hubanks, 455 Commercial Street was constructed in the early 20th century as a berth not for a whom, but for a what: Tamerlane. This sailboat took its name from a whaling bark captained by Joshua Baker Winslow on three voyages out of New Bedford, in 1854, 1858, and 1865. Provincetown’s Tamerlane was owned by Captain Winslow’s grandson, Henry Joshua Winslow (1880-1963), and his wife, Grace (Davenport) Winslow (1877-1970). The Winslows built and spent summers in the gambrel-roofed house next door, 457 Commercial Street. Tamerlane was kept in this combination boat house and garage. “They sailed her in Provincetown Harbor,” the Winslows’ granddaughter, Katharine Winslow Herzog, wrote in 2018. “The Tamerlane was quite well known. People still tell fearsome tales of my grandmother ringing a bell and telling people to stay off of that boat!” Both Nos. 455 and 457 were owned at one time by George Bryant. He sold them in separate years to separate owners, and the boat house-garage was converted into a dwelling. Rodgers bought it in 2016. He and Herzog met online after he noticed her middle name — Winslow — on a Facebook post she wrote about Provincetown. The families met in person in July 2018. “Kathy put together a collection of photographs and a written history of the property for us, which we will treasure,” Rodgers wrote later that day. “We now have pictures of the original boat, the Tamerlane, that was stored in our home when not in use.” Tamerlane wound up in the hands of Munro G. “Mun” Moore (1927-1995), an avid sailor, a developer, and a founder of the Fine Arts Work Center.

In a town full of architectural follies, it is folly itself to choose a favorite. But George Bryant’s abandoned salt works project of the 1970s surely ranks near the top for its scope and ambition, its persistence for more than 30 years and the fact that it hides in plain sight, just behind Angel Foods but probably unnoticed by 90 percent of the store’s patrons.

To appreciate the project fully, it helps to know that salt production was a keystone of the economy and central to Provincetown life. Clean, pure salt was needed to preserve cod and other freshly caught fish by drawing moisture out of the gutted, beheaded bodies. Before refrigeration, such rudimentary preservation was essential. Otherwise, there was no way to keep the fish for local consumption nor to ship it out to mainland markets. END_OF_DOCUMENT_TOKEN_TO_BE_REPLACED