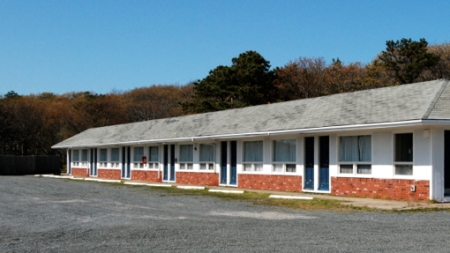 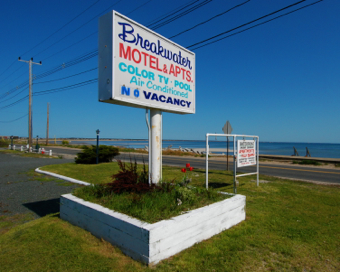 The Breakwater Motel, one of the first in Provincetown, marks its 60th anniversary in 2013. In an era when travelers are supposed to care about the thread count in their sheets, its pitch is refreshingly modest: “The perfect choice if you are on a budget and just need a clean tidy room in a great location.” (The rates in 2012 ranged from $65 a night off-season to $175 a night in season.) Perhaps it was its location at the edge of town that kept the Breakwater from being a lightning rod when it was constructed in 1953 by Dick Bishop of Elizabeth, N.J., and Carl Bradley of Cranston, R.I. END_OF_DOCUMENT_TOKEN_TO_BE_REPLACED 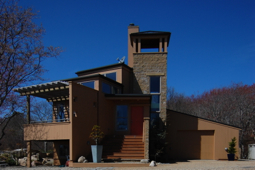 Douglas P. Fiebelkorn, a lawyer and certified public accountant in Randolph, Mass., bought the property in 2001 and built this house, vaguely suggesting something out of Tuscany, in 2002. 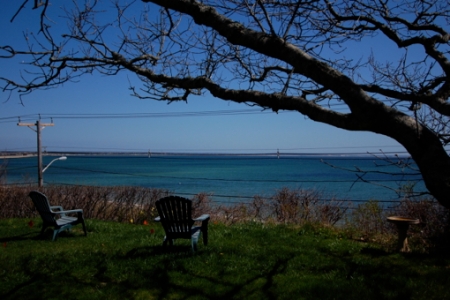 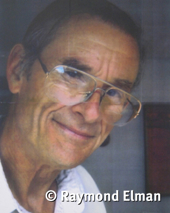 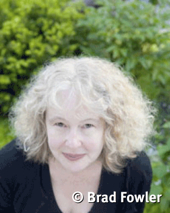 Roger Deering Skillings is the eloquent voice of voiceless Provincetown, of nearly invisible Provincetown; of those whose faces peer dimly at the midday world through the windows of what was once a Bermuda Triangle of fantastic despond — the Old Colony Tap, the Governor Bradford and the Fo’csle (now the Squealing Pig). “Provincetown aspires to the condition of Venice,” he writes as he opens his 1980 collection, P-town Stories (or the Meatrack). “It’ll never make it, except maybe in smells.” END_OF_DOCUMENT_TOKEN_TO_BE_REPLACED 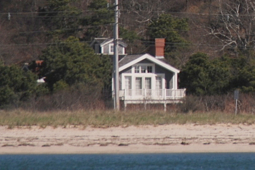 Built in 1951, this 3,300-square-foot house belonged until 1993 to Paul B. Foss, the third generation of the family that gave its name to Foss Woods. It has since been owned by Katharine E. Bachman, a real estate lawyer in Boston, and her spouse, Dr. Kathleen F. Thurmond, an obstetrician and gynecologist. 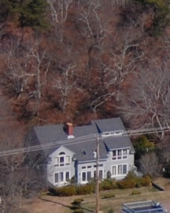 Patricia Ellen (Cabral) Papetsas (b 1930), of 70 Commercial Street, has owned this property since 2000 through the Patricia E. Papetsas Family Trust. The 4,100-square-foot house was built in 1988. Papetsas is the sister of Robert Cabral, the owner of Fisherman’s Wharf; and of Reginald Cabral and Halcyone (Cabral) Hurst, two of the co-owners of the Atlantic House. In 1950, she married Jack Papetsas (1930-2009). They had two sons, Thad (b 1955) and Brock. 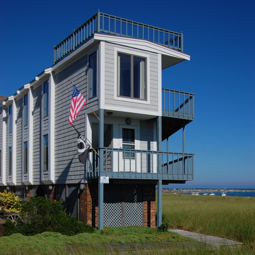 Not long after this peculiarly shaped and oddly detailed 1,900-square-foot house was built in 1991, it was acquired by Donald J. Slater and his wife Valerie J. Slater. Don Slater had until recently been the president and chief executive officer of the S&A Corporation, which owned and ran the Steak & Ale and Bennigan’s restaurant chains. The Slaters sold the house in 2007 to John DeMatteis and — in a terrific shock to family and friends — were a double suicide two years later on their farm in Albemarle County, Virginia. (Lisa Provence, “No Option? Possible Death Pact Tied to Financial Losses,” The Hook, 4 June 2009.) DeMatteis sold the property in turn to Joel S. Osnoss, of the giant international accounting firm Deloitte Touche Tohmatsu, and his wife, Grace Torres Osnoss. 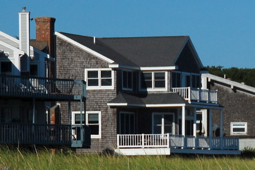 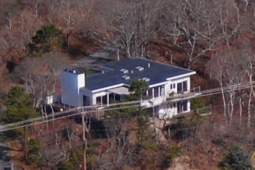 Very large, by Provincetown standards, this 4,700-square-foot house was constructed in 1976 by Nicholas “Nicky” Wells (d 1985), a real estate developer, and his wife, the artist Ray Martan Wells (1908-2011). They are the namesakes of Nicky’s Park and of the Ray and Nicky Wells Conservation Area, and were the founders of the Mews restaurant, 359 Commercial Street. Ray Wells also helped establish the Provincetown Group Gallery. They sold the house in 1981 to Sonja R. Merkel, who sold it in 1984 to Albert and Annmarie Cohen, who sold it in 1992 to Donna Lee Hughes, who sold it in 2009 to Wiebe Tinga for $1.36 million. Tinga is the president of the U.S. and Canada division of the giant toymaker Hasbro. 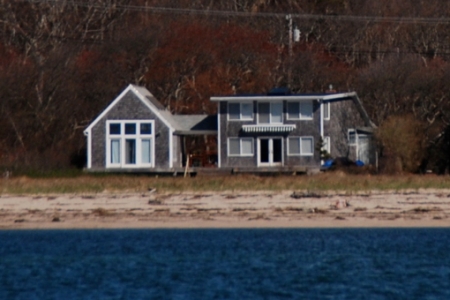 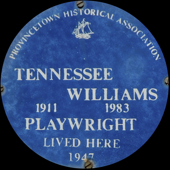 Not that anyone calls this waterfront property “Rancho Pancho” any longer, but it was its name during its most eventful summer — 1947 — when Tennessee Williams lived here with his lover at the time, Pancho Rodriguez y Gonzalez, and heard Marlon Brando read the part of Stanley Kowalski; a reading that won Brando, within 10 minutes, the lead role in A Streetcar Named Desire, which was soon to open on Broadway. And no, Williams said in Memoirs, Brando did not employ other means of encouraging the playwright to cast him. “I have never played around with actors,” Williams declared, “it’s a point of morality with me and anyhow Brando was not the type to get a part that way.” END_OF_DOCUMENT_TOKEN_TO_BE_REPLACED 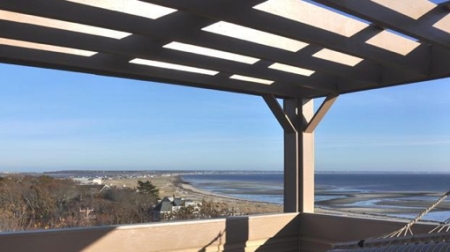 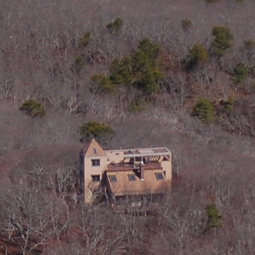 With a pyramidal-roofed tower looking a bit like a Tuscan campanile, 774 Commercial stands head and shoulders over the other houses of Foss Woods. Though built fairly recently, in 1986, it’s said to have that most wonderful of local amenities: a fireplace by the sculptor Conrad Malicoat, whose other work includes 36 Commercial and 64 Commercial. This 2,500-square-foot, two-bedroom house is on the market (as of 2012) for $1.995 million, through Coldwell Banker Pat Shultz Real Estate. 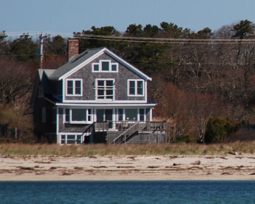 Built in about 1920, according to the assessor’s office, this cottage has long been in the hands of the Winstanley family. Dr. Nathan B. Winstanley Jr. (1919-2011) and his wife, Dr. Rosemarie (Montegani) Winstanley (±1930-2003) spent summers here. Nathan joined the Haloid Xerox company in Rochester, N.Y., and worked there 20 years, after which he served as a lecturer at the Rochester Institute of Technology. Rosemarie, a family and marriage counselor, headed the Allied Board of Mental Health for the Commonwealth from 1996 to 2000. END_OF_DOCUMENT_TOKEN_TO_BE_REPLACED 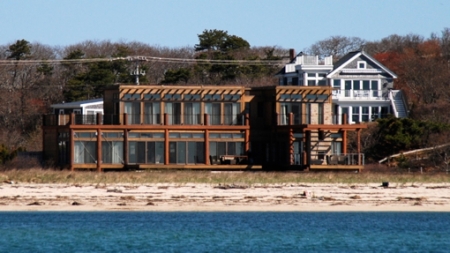 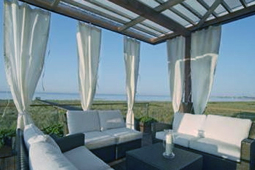 One of very few new houses to break completely from the gable-and-shingle-and-shutter vernacular, 781 Commercial nonetheless looks quite at home on this stretch of beach. Its extreme horizontality and stout cylindrical piers recall a wharf structure; only one set parallel with the shoreline, rather than perpendicular to it. It is the work of Michael Winstanley Architects and Planners of Alexandria, Va., and (as of 2012) it was on the market for $2.65 million, from Coldwell Banker Pat Shultz Real Estate. END_OF_DOCUMENT_TOKEN_TO_BE_REPLACED 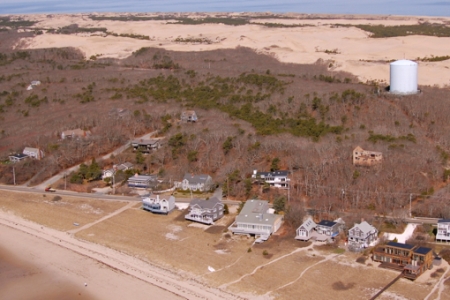 This 15-acre conservation area is, by degrees, lending its name to the small neighborhood between the East End and Mayflower Heights/Beach Point. And that seems appropriate, since the Foss family of Malden, Mass., has been an important part of life in the eastern outskirts for more than a century. END_OF_DOCUMENT_TOKEN_TO_BE_REPLACED 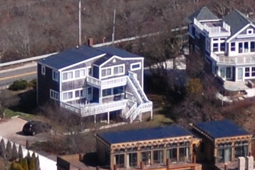 The family of Jerome Harris has owned this property for many years. 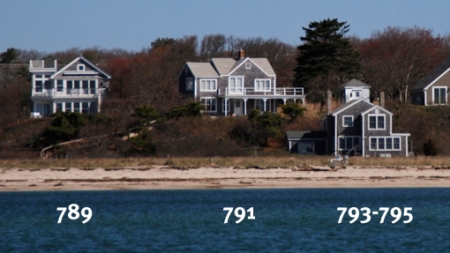 In contrast to the typical condo arrangement, in which multiple owners each have a small slice of a single building, the Long Point Condominium is a single tax lot with three distinct houses, each of them owned entirely by separate parties. No. 795 belonged to the poet Jason Shinder (1955-2008) and remains in his family. END_OF_DOCUMENT_TOKEN_TO_BE_REPLACED