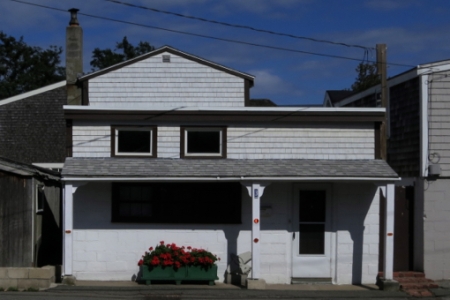 The abstractionist Erna Partoll (b 1932), represented by the Berta Walker Gallery and profiled on the Provincetown Artist Registry, has owned this property since 1970, the year she moved to Provincetown. Born in Switzerland, she emigrated to the United States in 1960 and studied at the Art Students League and the New School for Social Research. She also studied with Paul Resika. The artist’s statement says, in part: “The archetypal shapes of circle, square, wave, and arch – opening and closing — advance and recede as the rhythm of alternates: life and death, joy and sorrow, heaven and earth, yin and yang.” • Historic District Survey • Assessor’s Online Database ¶ Posted 2013-02-05

Charles Kaeselau’s grandson Treg C. Kaeselau (b 1960) owns this property with his wife, Jean Marie Kaeselau (b 1969), though they live elsewhere in town. Kaeselau is serving as the chairman of the town Recreation Commission through December 2014. • Historic District Survey • Assessor’s Online Database ¶ Posted 2013-02-05

This note arrived in January 2015 from Nick Thorkelson and Cynthia Bargar, owners of 11 Howland Street, formerly 212A Bradford Street: “We bought the house from contractor David Grandel in 1993, and we believe he bought it from the Patricks, thus the Bradford Street address. We have been told it was originally a machine shop for the cold storage, that it was an art gallery for a long time (1950s?), and that Zero Mostel lived there for a while.”

When Nancy Whorf (Kelly) died in 2009, shortly after Romanos Rizk, The Provincetown Banner said a major gap had opened “in the upper echelons of the Provincetown art colony, as if two of the brightest stars just disappeared from the sky.” (Sue Harrison, “Provincetown Artist Nancy Whorf Dies at 79,” The Banner / Wicked Local, 29 June 2009.) Though she left this home several years earlier as she succumbed to one serious illness after the next, Whorf had centered much of her life around No. 14, where she raised her daughters Julia Whorf Kelly (Perry), Lydia (Whorf) Pratt and Megan (Whorf) Nelson. END_OF_DOCUMENT_TOKEN_TO_BE_REPLACED

Not that the Tasha family set out to create such a thing when they bought this enormous property in 1944, but their sprawling compound has a mystical feeling at times, as if it were a fantastic movie set depicting ur-Provincetown — not a literal rendering, of course, but a three-dimensional expression of the old town’s spirit: dense, communal, primitive and modest; inventive, ingenious, improvised and eccentric; romantic or shabby or mysterious, depending on your angle of vision and the time of day. Also, this must be one of the last places in town where residents can hear chickens from their bedrooms. Presiding over the compound these days is Paul D. Tasha (b 1952; pictured), a fisherman and horseman; the youngest child of Herman J. Tasha (1908-2000) and Rose “Sonny” (Savage) Tasha (1910-1994), who moved here from 222 Bradford Street, and a grandson of John Tasha (±1874-1954), who moved to Provincetown from São Miguel in the Azores. Significantly — and appropriately — Tasha Hill was also the last home of Harry Kemp, the Poet of the Dunes (1883-1960), whose cottage is shown in the above photo. Hazel Hawthorne Werner (1901-2000), the writer and author of Salt House (1934), also lived here. END_OF_DOCUMENT_TOKEN_TO_BE_REPLACED

This hillside aerie is owned by Michael P. Peregon, a retired professor of economics at Bentley College in Waltham, Mass., and a member of the town’s Visitor Services Board. • Assessor’s Online Database ¶ Posted 2013-02-10

Usually, when people say, “I’m building a house,” they mean they’ve hired a general contractor to build them a house. When Paul Tasha of 15 Howland Street says he’s building a house, he mean’s he’s building a house: stone by stone, beam by beam, board by board — as much of it by hand as he possibly can. One might call it artisanal construction, though Tasha himself would probably wince at that chichi word. You might also call it the single largest work of art in Provincetown. True to the town’s tradition, it makes use wherever possible of found material, both natural and constructed. END_OF_DOCUMENT_TOKEN_TO_BE_REPLACED 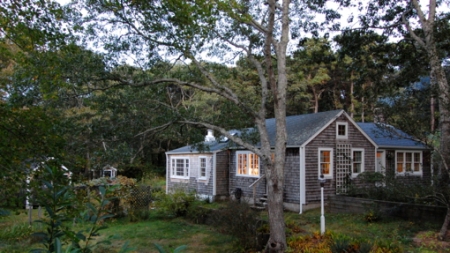 This lovely little dell has always struck me as a magical kind of place that must be inhabited by interesting folks, so it seems fitting that it’s home to Victor Powell (b 1950), the sandal maker, leathersmith and proprietor of Victor Powell’s Workshop at 323 Commercial Street, and his wife, Ardis Markarian (b 1947), who is also a craft artist. According to the Provincetown Artist Registry, Powell arrived in Provincetown in 1975 and ran a leather store called Skin from 1982 to 1998. He bought this property in 1987 from Helen Valentine. • Assessor’s Online Database ¶ Posted 2013-02-10

The oldest constituent in the trio is the Young agency, founded in 1901-02 by William Henry Young (1871-1942), one of those remarkable figures whose fingers were in every civic pie. “No one man has done more to promote the life of the village in its various relations to banking, business, art, religion, lodge activities, the fishing industry and the growing tourist business of recent years,” The New Bedford Standard Times said in 1929. END_OF_DOCUMENT_TOKEN_TO_BE_REPLACED

Cordwainers’ Row. Not too far up the road from the home of Victor Powell is a house owned by Rita S. “Hersh” Schwartz (b 1947) and Sheldon T. Schwartz (b 1949), the proprietors and namesakes of Hersheldon’s Leather, 317 Commercial Street. • Assessor’s Online Database ¶ Posted 2013-02-10

This 24.6-acre open space, owned by the town, stretches about 1.3 miles from Howland Street, where it is essentially an extension of Harry Kemp Way, to a point just beyond Snail Road. It is known as the Old Colony Nature Pathway as it occupies the right-of-way of the Old Colony (later New Haven) Railroad. END_OF_DOCUMENT_TOKEN_TO_BE_REPLACED