These side-by-side photos, taken in 2010 and 2012, simultaneously show how faithfully the renovation of 48 Franklin, by Robert Valois of Truro, tried to hew to the original form and fabric of the house and also how difficult it is to perpetuate the ramshackle, slapdash, bubble-gum-and-baling-wire nature of the place — its “character,” for want of a better word. 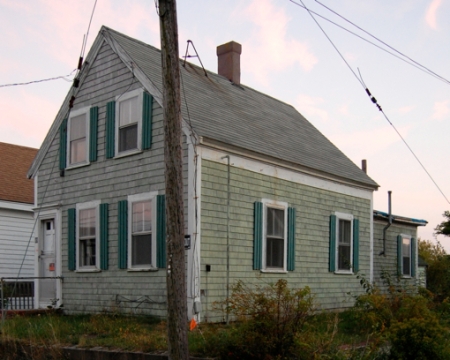 Character like that typically comes from decades of uninterrupted use by one family, during which — because of financial or logistical reasons — no opportunity ever presents itself for a thorough renovation. It is easy to imagine the 48 Franklin Street of 2010 looking almost identical to the 48 Franklin Street of 1948, when this property was acquired by Catherine E. “Kina” (Rego) Pierce (1913-2007) and her husband, Elroy Pierce (1908-1978). Actually the house was clearly in family hands long before that, since Catherine’s parents, Antonio and Mary (Joseph) Rego, were listed among the grantors in the 1948 sale, under which the house changed hands for $1.

Catherine was a longtime hostess at the Provincetown Inn and an active participant in Catholic benefactions, including the St. Vincent de Paul Society clothing drives, for which she was awarded a Marian Medal in 1987 from the Diocese of Fall River. Elroy was a caretaker whose evident joy in life was the game of whist, which he played avidly and well at the V.F.W. hall, the Portuguese-American Civic League headquarters and elsewhere. After his death in 1978, she continued to live in the house through the 1990s, before moving up to the Manor, where she died in 2007.

Three years after Mrs. Pierce’s death, the house was sold by her great niece, Leeann Morris, to Donald H. Eunson Jr. and his partner, G. Douglas Evans, of Jamaica Plain. Eunson is a planner and landscape designer whose work concerns itself with walkable communities. He told the Historic District Commission in November 2010 that he and Evans had purchased 48 Franklin “because they liked the simplicity of the house and the location.” They received permission from the Planning Board in January 2011 to remove the existing shed, rebuild the retaining walls, renovate the existing structure and expand it by 230 square feet.

They also offered to donate the 9-by-10-foor shed to Jay Critchley, who now counts among his many semi-Quixotic causes the preservation of Provincetown’s little ancillary buildings — sheds, shacks and outhouses — which are characteristic (there’s that word again) of such an important era in town life. Unfortunately, the salvage plan at 48 Franklin was frustrated by time, logistics and insurance concerns. • Assessor’s Online Database ¶ Posted 2012-12-30