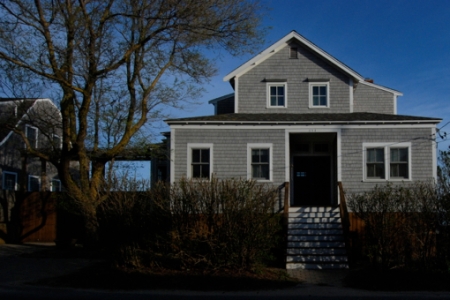 The refraction and distortion of light were themes that deeply engaged the Chicago artist Richard Aberle Florsheim (1916-1979), so it seems fitting somehow that we cannot be absolutely certain when we look at 651 Commercial that we are seeing his house. Some of its bones are still there somewhere, but a gut rehabilitation in 2003 for Lise Motherwell and Robert Steinberg, the current owners, left some preservationists with the sense that another historical property had been all but demolished under the rubric of renovation. As to the property’s most renowned owner — perhaps the first thing to be said about Florsheim is what he wasn’t. Contrary to local legend, he wasn’t an heir to or a beneficiary of the Florsheim Shoe Company fortune; at least, not directly.

Milton Florsheim, who started making shoes in 1892, was Richard’s first cousin, once removed. Richard’s father was Leonard Florsheim (1878-1964), an executive in the transportation empire created by John D. Hertz in the early 20th century: the Hertz Drive-Ur-Self System, acquired by General Motors in 1926; the Chicago Yellow Cab Company; the Chicago Motor Coach Company, which ran the bus system until it was purchased by the Chicago Transit Authority in 1952; and Omnibus Corporation, parent of both Chicago Motor Coach and the Fifth Avenue Coach Company in New York. Omnibus was also the corporate predecessor of the Hertz Corporation. As such, in 1953, it bought back the rental car business from G.M.

So that was Richard Florsheim’s family legacy. His artistic background was cultivated during what amounted to a grand tour of European ateliers in the late 1930s, financed by his wealthy father, in the course of which he also met Russian-born Helen Porfirieff (1913-1988), whom he later married. After serving in the Navy during World War II as a cartographer, Florsheim began exhibiting his paintings and teaching. That brought him together with John W. “Jack” Kearney at Kearney’s Contemporary Art Workshop in Chicago.

“Mr. Florsheim was a painter of light,” his New York Times obituary read.

“Light on water, light on boats, city lights. In fact, he was hailed for his work in depicting manmade artificial light. He worked light and exciting color into the usual subjects of his linear work, cityscapes — bridges, skylines, factories, airports. He was also noted for the summer seascapes he painted in Provincetown.”

The Florsheims bought this home in 1957 from the Bastien and Corbett families. Kearney’s daughter, Jill, who lived nearby, recalled: “It was then a very bare, rustic kind of cabin on the water. Helen Florsheim was an imposing figure who wore a tight bun on her head held in place with chopsticks. She had a banana-split party every summer for the kids in the neighborhood. She was very formal and unapproachable, but the lure of free ice cream trumped our fears.”

Florsheim’s estate sold the property in April 1990. It was purchased from interim owners five months later by Steinberg and Motherwell, who is one of Robert Motherwell’s daughters. Through VonThaden Builders/Designers, they applied in 2002 for permission to undertake what was variously described as a rehabilitation or a reconstruction of No. 651. Their architect was Paul Krueger of Cambridge. Just how fully they had divulged the extent of their plans in advance was the cause of considerable controversy and debate in January 2003 when — during construction — The Banner raised the question with local officials of whether “the house looked more demolished than it should have.” (Mary Ann Bragg, “Work on House Seems to Go Far Beyond Renovation,” The Banner, 9 January 2003.) John Dowd, the chairman of the historical commission, told Bragg he no longer recognized the house and said, “That was not what was described to us.” But Krueger said, “There was surely no attempt to do something through subterfuge.” 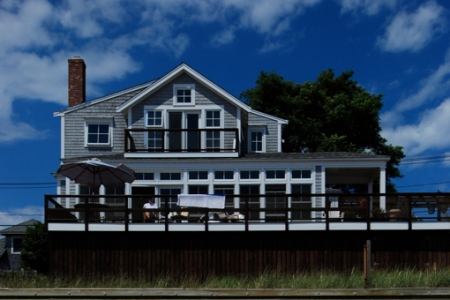