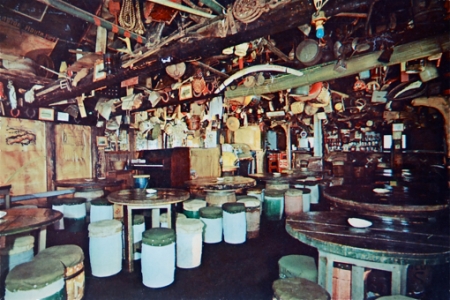 A landmark of women’s history, 193A Commercial has been a social center of lesbian life — and gay life generally — since the early 1950s, when it was the Ace of Spades Club. (The club famously refused admission in 1961 to the first lady, Jacqueline Kennedy.) “Allegedly the longest continuously running lesbian bar in the United States, the Ace of Spades played a critical role in Provincetown’s history as the first and, for many years, the only social institution at Land’s End that catered specifically to women,” Karen Christel Krahulik wrote in Provincetown: From Pilgrim Landing to Gay Resort (New York University Press, 2005).

John W. Atkins, who ran the place with his daughter Frances S. Atkins, seems first to have applied for a license in 1950. “Gay women fondly recall the Ace of Spades as a small and dark but cozy bar with wooden barrels standing in as stools, a stench of stale liquor and a sign-in book at the door,” Krahulik wrote.

The Ace of Spades offered women a place to express their desires for other women freely. And catering to gay women meant John and Frances Atkins could partake in Provincetown’s increasingly profitable lesbian and gay tourist industry.

As a “club,” however, the Ace of Spades was legally bound to limit admission to members and — though it’s less clear whether this was a regulation or an interpretation — to keep a register of its members’ attendance. It doesn’t take much imagination conceive how daunting it would have been to persuade women who were attracted to other women to formally associate themselves with a lesbian-identified institution in 1950 (the year the Harvard literary critic F. O. Matthiessen jumped to his death in Boston in part out of fear he would be revealed as homosexual). To underscore the “club” fiction, its advertisements in The Advocate were given the rubric “Notice to Members.”

It took almost no time at all for the club to run afoul of three selectmen: Ralph S. Carpenter, the developer of Delft Haven; Frank H. Barnett; and William A. White. In August 1952, they announced a campaign to wrest Provincetown back from the “homosexual element,” beginning with a crackdown on “the nightclubs which are the nests where the homosexuals congregate and the attraction that draws them here.” (“Selectmen Ask Support in Crusade to Stamp Out Degrading Influences,” The Advocate, 7 August 1952.)

In less than a month, eight clubs, including the Ace of Spades, were brought up before a hearing convened by the selectmen to consider a variety of charges, including a failure by the clubs to insist on membership identification or to compel customers to sign registers with their full names and addresses. Even in the McCarthy period, however, the selectmen’s strong-arm tactics seemed to offend as many people as they inspired. And hey, this was Provincetown. How seriously could you quarrel with businesses that made money off visitors?

Mrs. Kennedy tried to get into the Ace of Spades on 30 August 1961 in the company of Gore Vidal (with whom she shared a stepfather, in the person of Hugh D. Auchincloss) and a Secret Service agent. “They were refused admission,” The Advocate reported, “because the door man failed to recognize Mrs. Kennedy, and she was traveling without her ID card and the Ace of Spades has a club license.” (“First Lady Enjoys Cape End Play, The Advocate, 31 August 1961.)

The inspired décor of the Ace of Spades was in part the work of Jeanne “Frenchie” Chanel, the owner of one of the dune shacks. Just a few months before the first lady was rebuffed, Chanel painted the juke box with a scene from the Back Shore and also painted some of the leather-topped barrels used as seating. (At the time, women could not be served a drink in the Commonwealth of Massachusetts unless they were seated, which may explain in the photo above why there are so many barrel stools.) 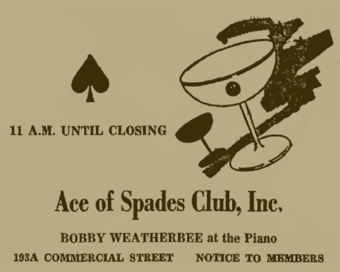