Two eras of town history, both now seeming almost equally remote, are embodied in this odd-looking mashup. The south half of the hybrid, pictured above, is a classic three-quarter Cape. It is believed to have stood originally at the east end of the Long Point settlement, where it served as the home of one Jonathan Smith, whose storehouse was not far away. Like the other buildings on the point, it was floated over to Provincetown in the mid-19th century, after which it was grafted on to a two-story house on Pleasant Street.

The map section shown at left comes from J. D. Duncan’s minutely detailed Map of the Extremity of Cape Cod Including the Townships of Provincetown & Truro in the Norman B. Leventhal Map Center at the Boston Public Library. I’ve superimposed upon it a rough location for the Jonathan Smith house when it was on Long Point, based on the map Long Point Provincetown and Location of Its Inhabitants in About 1857 from The Provincetown Book by Nancy W. Paine Smith (1922). The map in Smith’s book is utterly beguiling, though whether it’s a work of forensic archaeology or nostalgic reminiscence is another question entirely. [Correction: The superimposed map legend should read “Jonathan Smith’s house,” not “Joseph Smith’s house.” And it will — some day. Thanks to the ever-observant Denise Avallon.] 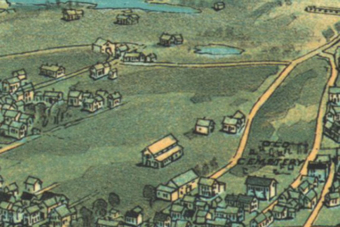 A whole book — admittedly one for a very small and discerning audience — could be written about Provincetown’s homegrown dairy industry. Of course, it would make sense that in the days before mechanical refrigeration an outpost as remote as the Cape tip would need a high concentration of dairy farms. Pleasant View was one of several, the most famous being Galeforce, remnants of which still exist in the West End. John King was said by The Provincetown Advocate to have “owned some fine herds of blooded stock” — or purebreds. On several occasions in the 1910s, milk from his farm won prizes for its cleanliness at agricultural affairs. In the middle of World War I, King apologized to his customers for having to raise the price of milk to 14 cents a quart, owing to hay and grain having nearly trebled in price.