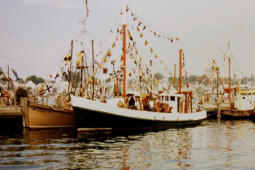 The Plymouth Belle, pictured here, was the pride of Anthony Francis Jackett’s life. Jackett (1924-2011) was the son of Antone P. Jaqueta, originally of Figueira da Foz, Portugal, and Mary Agnes (Mayo) Jackett of Provincetown, according to his obituary on the Gately McHoul Funeral Home Web site. Mrs. Jackett died when he was seven and young Anthony was entrusted first to Angie Ramos and then to the care of his sister Agnes Salvador and her husband, Louis Salvador.

He worked for the DeRiggs Ice Company, 194 Bradford Street, before joining the Army in 1942. As a member of the 348th Combat Engineer Battalion, he witnessed firsthand the horrific price paid on D-Day by the troops landing at Omaha Beach in Normandy.

Jackett skippered the Plymouth Belle, a 65-foot dragger, beginning in 1955, which was the year that he and his first wife, Doris S. Jackett (b 1926), bought this property from Oscar L. and Agnes L. S. Snow. He was able to buy the boat in 1960. “He and his crew maintained it impeccably,” the obituary recalled, “and he often noted that he was blessed to have been able to succeed in a career without an education, but gifted with a strong work ethic and a fine boat. He co-chaired the early Blessings of the Fleet and was proud to have driven the bishop [of Fall River] in his Buick convertible.”

It was purchased from Mrs. Jackett in 1994 by Jean E. and James J. Lucey. To confuse matters — and this website, until the error was pointed out — the Lucey/Jackett house, which was originally numbered 50 Pleasant Street, has been redesignated No. 48A. A new house stands at 50 Pleasant Street. ¶ Updated 2016-09-06