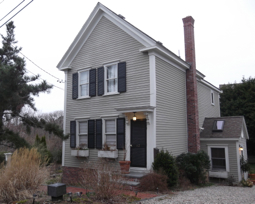 This was the home of Viola A. “Vo” (Ferreira) Cook (±1875-1960). She shouldn’t be confused with the Viola Cook of 376 Commercial Street. This Mrs. Cook was born in São Miguel in the Azores, immigrated when she was 15 and married Manuel (Freitas) Cook at 17. Among their nine children were Frank “Friday” Cook (1898-1946), the namesake of Cookie’s Tap, 133 Commercial Street; Angie (Cook) Metallo, who lived here with her husband Jimmy after Mrs. Cook died; and Mary Ruth (Cook) O’Donnell, who lived with her husband Richard at 5 Atlantic Avenue.

At the time Mrs. Cook lived here, the property was known as 38 Franklin Street, the address of the abutting lot. One of Mrs. Cook’s great-grandchildren, Lisa Coleman, told me in 2013: “When I was a kid, the road leading down to the house was a very narrow dirt and crushed-shell road. And I do seem to remember my grandmother [Ruth] referring to it as Franklin Street. I don’t ever recall her saying Creek Road at all.” Young Lisa loved visiting her Aunt Angie and Uncle Jimmy in a house with such character. She remembers the claw-footed bathttub and the steep stairs. “It was just neat to be in the house my grandmother grew-up in and imagine where the stories she told me played out. My Uncle Jimmy always had a huge train set which was set up in the lower level of the house. If those walls could talk.”

Mrs. Cook’s obituary in The Advocate said she had “brought her skill as an expert with her needle and as lace-maker, and her christening dresses which she made for her friends are highly prized.” (“Viola Cook Dies, Funeral Tuesday,” The Advocate, 22 September 1960.) One of the last christening dresses she made was for her great-grandson Richard, Lisa Coleman’s oldest brother, who was born in 1959/1960. “That dress was also worn by my other two brothers, me, and my three children and countless cousins,” Coleman told me. “My kids also wore the bonnets she made to go with the dress. My daughter just recently got married and that was her ‘something old.’ She used it as her handkerchief, which she kept tucked in her dress.” The family hasn’t owned this house since 1994. But they have maintained its living history.