This storefront space is important historically as the Jules Brenner shop and gallery, from 1967 to 1974. Brenner (1917-1991) was a silversmith and goldsmith who worked elegantly in the Modernist vocabulary, creating stylish jewelry and accessories with great biomorphic flair. David Mayo recalled the gold jewelry as “spectacular.” Brenner’s wife, Lee (b 1926), helped in the management of the shop. As a gallery proprietor, Brenner showed the work of Red Grooms and Mimi Gross among others.

Brenner and Frederic Jungmann bought the Chrysler Museum of Art in 1973 with the intention of transforming it into the Center for the Arts in Provincetown. A 1975 directory shows that the center’s seminar program was run from this building. Lee Brenner still owns the property and lives here.

Though many artists’ works are shown in the storefront space today, the principal attraction today — as the gallery name suggests — is the Egeli family, descended directly or indirectly from the Norwegian-American portraitist Bjorn Egeli (1900-1984). They include paintings by his son Cedric Egeli, who is also a portraitist; Cedric’s wife, Joanette Hoffmann Egeli, a portraitist specializing in children; and their son Arthur Bjorn Egeli, a portraitist and landscape painter. Arthur Egeli also directed the 1993 movie The Art of Passion (originally released as Unconditional Love, which was filmed on location. “In shooting a movie where he once studied oils, Egeli had the rare opportunity to capture the famous the famous light in Provincetown in celluloid,” Reva Blau wrote when the movie was released on DVD. (Reva Blau, “Egeli’s Painterly Film Explores ‘The Art of Passion,'” The Banner, 19 April 2007.) 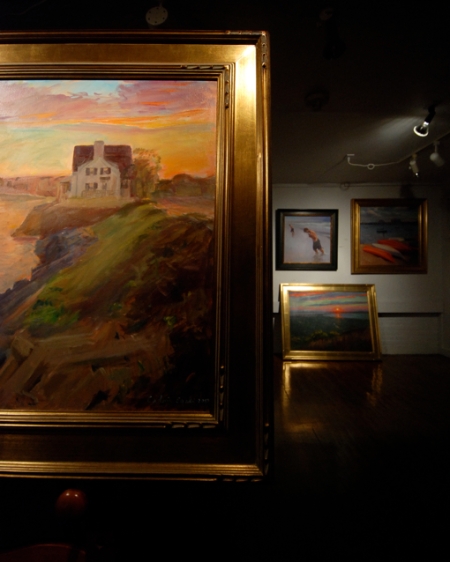 One thought on “382 Commercial Street”